Are you bored of films repeating themselves? It's not just the endless remakes that are giving you a sense of filmic deja-vu, many films follow tried and tested formulas. This month, Boys n the Hood goes against Straight Outta Compton.

1. Both films are set in the 90's LA where the struggle was in the hood.

2. Both movies follow the lives of 3 main characters; there's a talented guy who lives with his mom and his baby mom, a guy who's the stereotype of a 90's gangster and the guy who's played by the actor with Jr at the end of his name.

3. Both movies feature Ice Cube with Jheri curls - the difference is, in Boyz n the Hood, Ice Cube plays someone else and in Straight Outta Compton someone else plays Ice Cube.

4. There's a scene where two of our characters are faced with a group of intimidating gangsters, who happen to drive by and end up point a gun in their face.

5. In another scene our characters get stopped by the police just for minding their own business, and we see a mild version of police brutality take place.

6. There's also this racist black police officer, who always seems to enjoy to pointing a gun at his own kind.

7. Two of the characters start dissing each other, which causes black on black violence in the film.

8. One of the characters who is covered in blood, decides enough is enough and plots to shoot the guy that made him cry, but gets convinced not to after a mentor figure tells him he's not about that life.

9. There's a really sad scene around the end where one of the characters dies and everyone gathers around to sheds a tear or two.

10. At the end we see our characters walk away from someone and we find out what happens to them after the credits. In Boyz n the hood D-boy walks away and fades out of the scene telling us he died two weeks later, in Straight outta Compton Dre walks out of a door into the light and the rest is history.

Both movies serve a purpose of exposing an issue relevant to their time. Although they both highlight the struggle of living in the ghetto there more complex issues involved. In Boyz n the Hood, it's about surviving in the ghetto as a black male, where as Straight outta Compton it's about making the most out of opportunities and not wasting your life. With Straight outta Compton the police brutality is a heavy antagonist from the start of the film, whereas in Boyz n the hood it's a minor issue.

The subject of fatherhood and being a man is an important message in Boyz n the Hood and is represented through our characters - Tre who has a father, Ricky who is a father and Doughboy who has neither father, nor child.

Both films' success lies in their relevancy to today's society.

Those were ten reasons why these films are the same, if you agree or think I've missed things out let me know and share your comments below 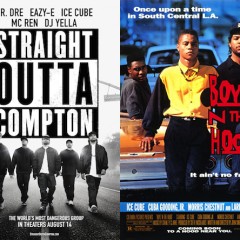 Are you bored of films repeating themselves? It's not just the endless remakes that are giving you a sense of filmic deja-vu, many films follow tried and tested formulas. This month, Boys n the Hood goes against Straight Outta Compton.