1. Both movies come from a previously bigger movie, but nonetheless (mostly) hold up to their predecessor.

2. Both characters are super spies on a mission to take down this one guy.

3. After the mission the main characters go back to the office for a debrief with the boss who is obviously played by a badass.

4. There's this secret organisation that our characters faced in the past that has now infiltrated the hero's base. They're both giving octopuses a bad name because they chose them for their company logo. Great evil minds think alike.

5. There's a guy in a suit who's in charge of this large expensive security program which violates privacy law in every way possible. Spoiler alert guy in the suit is a #traitor.

6. Our characters get a blast from the past with their childhood friend who's the main villain of the movie.

7. There's also a dude who doesn't say much, but is seen in every one-on-one action scene with the main character.

8. Both our characters meet their boss for a final pep talk before suiting up and going back to the office for the final showdown.

9. Both films reference past movies in the franchise with villains who died (but didn't die) and now try to blow up our lead characters.

10. There's a countdown for the security program to launch, which our secondary characters deal with while our main character has a showdown with their childhood buddy.

Overall both movies were good spy movies. I do think that Spectre was more of a generic bond film (Roger Moore style) but delivered well. The Winter Soldier was definitely a game changer, especially for a character who wasn't anyone's favourite from The Avengers.

If you agree with my list or think I've missed a lot more points share your comments. I'll be writing this every month, got something you'd like me to compare? Let me know! 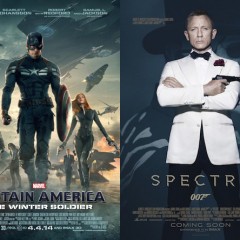