Voice MagFeaturesWho did it better: R…

Keeping in line with this month's theme of technology in the arts, I have decided to pair two albums from two different bands against each other to see which is better! We have Radiohead's legendary OK Computer versus Enter Shikari's powerful The Mindsweep!

First into the ring is OK Computer by Radiohead. This album was released on 21st May 1997, the year of the controversial general election when Tony Blair came out on top. Upon first hearing this album 18 years later, I was taken back by the sound, because I had by this point gotten used to the punk and grunge influenced style of alternative rock, so Radiohead's experimental version of this genre was completely new to me!

Of course, this experimental sound of Radiohead is what makes them so iconic, and I almost instantly fell in love with the album. Not just because of its ambitious sound, but because of the themes and abstract lyrics that comes with it. Take the song Paranoid Android for instance; this song's prog- and alt-rock sound both compliment Thom Yorke's falsetto vocals and angst-filled lyrics of anti-consumerism and social alienation, and altogether the song happily stands out as the album's flagship song. I think it's also better to mention OK Computer's eerie interlude Fitter Happier – which consists of a synthesised voice from the Macintosh SimpleText application along with a quiet, textured sound in the background referring to fragments of media information, with the words carrying a bitter and ironic undertone when speaking about being fitter and happier in a large mass media and consumerist environment.

In terms of technology, the time in which OK Computer was released saw the beginning of technological advancement, which includes the development of the internet and the birth of the digital age that we are now currently in, as well as the strong political atmosphere in May 1997. The album successfully makes use of the technology in order to portray its anti-consumerist and political messages; songs like Fitter Happier and Electioneering both make use of technology in their sounds alongside the strong themes, thus representing the bitter and dying end of 1990's Britain; it's what makes the album so amazing.

Flash forward to today; we have Enter Shikari's The Mindsweep, released on the 14th January 2015. OK, it's probably a little bit aggressive for most people (oh the loneliness returns…) but it's still a great album. Like OK Computer, The Mindsweep was released on the year of the general election, thus there was a lot of political tension beginning to build up. Enter Shikari's album adds to the tension by criticising current affairs of the past few months, such as the depleting condition of the NHS, the economic recovery after the global financial crisis in 2008, and the lack of realism from politicians.

Although this album is not as abstract or experimental as OK Computer, it still uses the power of rock music and technology to deliver its message to the listener. For example, the track Anaesthetist uses a unique mixture of rapping, hardcore influenced guitar riffs and electronic (particularly dubstep) blast beats in order to emphasize the anger and frustration within the political concept. The sounds of electronica heard on this album also reach out to the modern audience who have grown up whilst electronic music developed, thus alluding to this album's success.

However, what is also appealing about this album is its post-hardcore influence, which is another genre that has grown with popularity. The angry and British vocals of Rou Reynolds bring firmness as well as a melody to the album's sound, and as a result the political themes are made much easier to comprehend. An angry album for a generation of angry youth; this album is pure awesome!

The question is which album is on top? Which album defies the British political agenda the best?

Let me know what you think in the comments below! 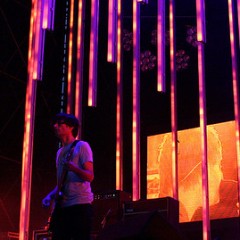 Who did it better: Radiohead or Enter Shikari

Keeping in line with this month's theme of technology in the arts, I have decided to pair two albums from two different bands against each other to see which is better! We have Radiohead's legendary OK Computer versus Enter Shikari's powerful The Mindsweep!