Check out the guys behind the art – techies, curators, website designers, marketeers…interesting work. Kolby thought so too – read his Gold opinion piece.

Your Arts Award is a great way to find out about the other jobs in your arts sector and how they relate to what you do. Take the time to familiarise yourself with these roles, and if you are part of a company, get to know the people who take on these roles. They probably aren't the sort of people who want to go onstage and take a bow, but that doesn't mean that they aren't there. It is important that you show them respect, even if others don't.

The same goes for art forms that don't manifest themselves onstage. For example, if you write for your school or university magazine or newspaper, take the time to find out what it is that the editors and designers do to take your piece and place it in a publication.

Sometimes, the best way to appreciate what your relevant 'behind the scenes' people do is to put yourself in their shoes. Use your Arts Award to explore their jobs. Do their jobs yourself. Volunteer to be a crew member on a show that you didn't get a part in, choreograph a dance that you won't be able to perform, edit other articles instead of writing your own. It doesn't matter whether you spend a day or a month doing the behind the scenes work, it will change the way you think of those people, permanently.

Read all of our top tips here. 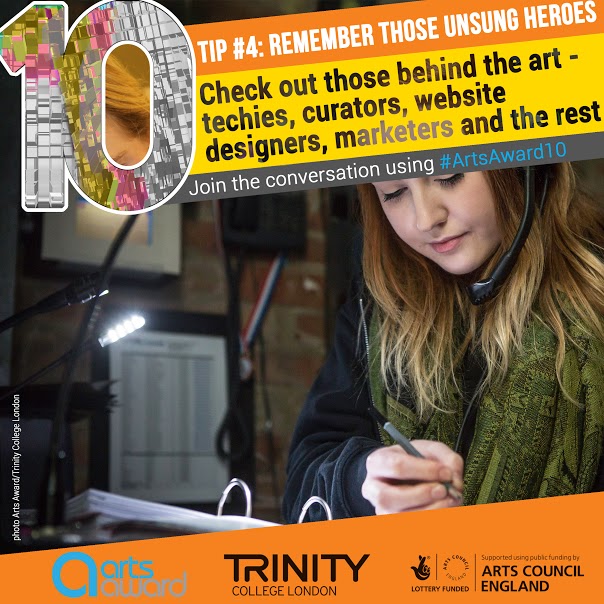 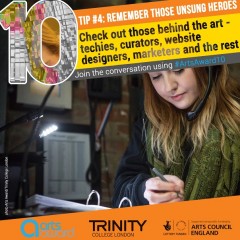 Check out the guys behind the art – techies, curators, website designers, marketeers…interesting work. Kolby thought so too – read his Gold opinion piece.