How has the homeless population fared under Covid-19? Despite the temporary measures put in place at the start of lockdown, with a second wave imminent, the UK's homeless situation is about to get a lot worse, and not just for rough sleepers.

When we think about Covid-19 and the impact it has had over our society in recent months, certain groups come to mind. The NHS, the elderly, and a large portion of the tertiary sector that cannot exist solely online, or are crumbling without the custom they had in a pre-Covid-19 society. One group that in my opinion got less media and public attention – although their current status and wellbeing hangs uncomfortably in the balance – is the homeless population. This in itself is nothing new; the government spends 80% of the year paying as much attention to the homeless situation as you would to a small crack in the pavement.

As a nation, our responses to the worst societal issues don't often align with the response needed to help combat the situation. When it comes to racism, our first inclination is to deny that it even exists. When it comes to the homeless crisis, it seems people are so desensitised to the issues of the homeless population that they no longer have an explicit, working knowledge of what homelessness looks like, let alone how to combat it during a pandemic that has claimed the lives of thousands.

According to ONS figures, there have been sixteen Covid-19 related deaths among the homeless population. Compared to other groups, this is a relatively low number. However, according to 'Combined Homelessness and Information Network', better known as CHAIN, not every homeless person is registered, so the number could, in fact, be higher. Although, the figures of those accounted for would not have been so low if initiatives to protect the homeless had not been implemented with the velocity they were back in March.

The most effective government scheme was the 'Everyone In' scheme that opened up hotel rooms to hundreds of homeless people and provided them with food and shelter. The 'Everyone In' scheme was a true testament as to how effectively homelessness could be treated when you have the full force of the government making an effort. Unfortunately, this in some ways proves that coming up with a solution to the UK's homeless problem is dependent on what those in Parliament deem as a crisis worth handling.

The 'Everyone In' scheme went alongside other government initiatives like distributing £3.2 million in funds to local authorities, 'the eviction ban', a suspension of evictions from Home Office asylum accommodation and the raising of the local housing allowance, according to a report by leading homelessness charity Crisis. As crucial as these schemes were to implement, not all of them ran as smoothly as the transition for workers onto the government's furlough scheme. Many homeless people were left out due to a set of criteria implemented by local authorities – essentially excluding certain homeless people from receiving help. The criteria required to receive help included the need to have a local connection to the town or borough, and to be of a preconceived priority need.

Believe it or not, these kinds of barriers come up often around schemes for the homeless. There seems to be this ridiculous notion that certain people aren't quite homeless enough to qualify for, or receive help from their local authority. It's hard to imagine how a stance such as this can be taken when dealing with people who are in a rock-bottom situation; if they can't turn to their local authorities, whose very existence is to serve their borough, who else are they supposed to turn to? Charities like Shelter, Crisis and St Mungo's are under an enormous amount of strain because there isn't enough social housing to assist the rising number of homeless people.

The success of 'Everybody In' saw over 4000 rough sleepers housed after their time as part of the scheme. Considering the time pressure, this is an impressive effort. Yet, somehow, the number of rough sleepers has increased by a third since March and is seen only to worsen, because rough sleepers are no longer the only ones in need of urgent help.

The economic fallout of the pandemic has pushed people into homelessness. As it stands,  there seems to be no visible plan in place to get these newly homeless people help, on top of the increased number of rough sleepers who – since the 'Everybody In' scheme has died down, with very few hotels still functioning in this way – are still in need of aid. Many of the hotels that took part in the scheme are no longer operating in this function, and the need for their replacement is a pressing issue.

[A plea from Sadiq Khan to the central government regarding winter, which is always a strenuous time for the homeless population, has been heard but a tactical response is still to be determined. Health professionals have told us repeatedly that Covid-19 attacks weaker immune systems; when winter does arrive, people's biological defences will be lowered, and the death toll, although low at the moment, could in fact rise because of such.]

Those who rent and can no longer afford payments on their properties have become the new priority for homeless support as the temporary eviction ban that was introduced during the lockdown, ended on September 20: an extension of the original termination date that was due in August.

The coverage of the issue has been focussed on the impending doom that renters are likely to face now that landlords are free to evict their tenants – despite the looming second wave and the fact that the coronavirus alert level now at 4. The purpose of the eviction ban was to prevent families from being evicted from their homes due to no longer being able to afford them. This too seemed like an effective strategy to buy time until a more permanent solution presented itself. However, according to an article by The Guardian, 20,000 families still suffered eviction during this time. It seems these schemes are not being appropriately policed and once the guidelines have been set, whether landlords, housing associations or local authorities choose to adhere to the rules or not, is not being monitored.

"Now the evictions ban has ended, the government must provide struggling renters with emergency funding to help them clear Covid-arrears and keep hold of their home. More than 300,000 private renters have fallen behind on their rent since the pandemic hit.

"With this deadly virus on the rise again, there could not be a worse time to expose people to the threat of homelessness. And while some of the short-term protections – like longer notice periods – are welcome, they don't apply to everyone, nor do they stop people getting deeper into debt.

"This crisis would not be happening if we'd had enough secure and genuinely affordable social housing to keep people safe. If Covid-19 is to teach the government anything about housing, it must be that we need to build more social homes – and fast. It is the only way to stem the rising tide of homelessness."

Speaking to a representative of Shelter, it is clear they are currently inundated with clients who are in need of support since the eviction ban came to an end, and it has not even been a month. Unless the government extends the eviction ban another six months, or perhaps longer, those evicted will be in the same predicament as the rest of the homeless populous. With this subcategory of homeless people now in need of help, where does that leave the rough sleepers in the UK on the priority scale? Those being evicted can range from single people to entire families, and because of this, it's right to fear that the rough sleepers will not receive the aid or attention they need just as much as those newly homeless. At the least, the 'Everybody In' scheme must be reinstated, without the unnecessary, divisive criteria to protect the rough sleepers from what is to come.

It may be pessimistic to say, but when it comes to the homeless population, there is a hierarchy to who gets helped and when. If the government ever wants to fix the UK's homeless situation permanently, these divisions they create must be eradicated, attention must be paid, pressure must be taken off of charities and funding reallocated, fast, because every life deserves to be protected – especially in a time of crisis. And, since the government has shown their hand and proved that they could help the homeless population, any excuse for ignoring the issue from here on out will be labelled as what it really is – an outright refusal to do right by those who need it most. 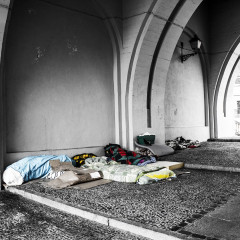 The continued effect of Covid-19 on the homeless population

How has the homeless population fared under Covid-19? Despite the temporary measures put in place at the start of lockdown, with a second wave imminent, the UK's homeless situation is about to get a lot worse, and not just for rough sleepers.