Voice MagFeaturesWhat’s the role of f…

Media literacy gives us so much. It's unquantifiable how much I've learnt, not from school, but from watching film and television.

It's equally unquantifiable precisely how important film and television is to our global culture. We yearn for the images and sounds with which we can all partake. And yet, our appreciation for precisely what it's worth is so limited.

However, there's hope on the horizon. Last year, the BFI started an Education Scheme for 5-19-year olds which endeavoured to provide a quality education of film to the formal curriculum. It works upon three themes: the value of film education, film education for all, and the role of the BFI. Now, it's all very young and progress is yet to be made but this level of integration and education of film to the culture of the country is terribly exciting and looks forward to very bright developments in the near future.

But that's not all we have. FilmEducation.org has been around for quite some time now and, although a bit less ornate, does a great deal of justice to its aim of providing a quality film education. It has a vast array of resources and links all collated for the pleasure getting educators to use film in their teaching.

Furthermore, there's the Into Film initiative whom we've reported on before. They do a massive amount of work on a grass roots level to not only get young people learning about film but learning precisely how to get involved in filmmaking. They are an arm of the BFI which does the work in different ways to the Education Scheme. Rather than teaching 5-19-year olds about film, they implant film into the development of young people. So they use it as a tool to help young people's development. Many Arts Award Centres are also Into Film centres. They also work with schools to provide Film Clubs as part of extra curricular education to improve their filmmaking, as well as their ability to think critically and analytically.

Going back to the beginning – why is film education important?

A rebuttal to this question is why is music and literature important? Answers to that question are they've been around for longer and they are around more. Does film not make as much of a contribution to popular culture as music and literature? Now, what difference does it make? What's the importance of film in particular?

As the most popular form of audiovisual entertainment and communication it makes us feel a great deal many emotions. We use it for so many reasons that it has become an everyday part of our lives. Some are more effective than others, some have had more of an influence on others, and its role has changed since its invention. The better we understand these aspects of its significance and how it is produced, the better our ability as creators and readers of it.

Nourishing our understanding of it from a young age is paramount. If nothing else, its significance seems to be growing. By teaching our young people about it, the less emptily they'll consider what they consume, the more thoughtful and responsible for what they enjoy they'll be. Media literacy is more important now than ever and we need to equip our young people with that as well as possible. 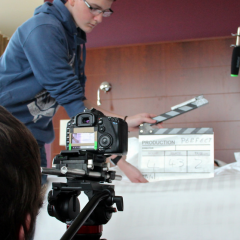 What’s the role of film education at a young age?

Media literacy gives us so much. It's unquantifiable how much I've learnt, not from school, but from watching film and television.