Harry is celebrated by Trinity for Artistic Achievement in Rock and Pop.

Harry was nominated by his parent for his achievement with drums in Rock and Pop. They said 'Harry had been learning with a private teacher but was never steered towards any forms of exams. In November 2018 he decided he would attempt a Trinity Rock and Pop award and opted for the grade 4 exam, within 4 weeks he had sat the exam and achieved a distinction. He immediately opted for his grade 5 to sit in March 2019, and again achieved a distinction. In June he skipped a grade and decided to challenge himself with Grade 7, and achieved this with Merit, narrowly missing his distinction by only one mark in each of his practical pieces. He is currently working on his Grade 8.'

In what ways would you say your Rock and Pop qualification has influenced your artistic achievement, creativity, leadership or progress?

The Trinity syllabus has really pushed me to advance my skills, as well as broadening the styles of drumming I started to try.  For example, in grade 7 I took on tracks ranging from Taylor Hawkins playing with the Foo Fighters to Steve Gadd playing with Paul Simon – a track I would never have thought to play if not on the syllabus.

How has participating in a Rock and Pop qualification impacted your artistic skills or career development?

Taking on the Trinity Rock and Pop grade exams really gave me a confidence in my own skills which I was maybe unsure about before tackling them. After passing my first grade exam I decided to apply to join a local band, Citrus Circus, and since joining them I now regularly gig in local music venues. I have also recently joined another startup band which has it’s first gig in April, and tonight is my first night covering a six show run of the musical Footloose in Edinburgh.  I was able to step in late to cover the musical due to the playing and reading skills I have improved during my grade progression.

My immediate goals are passing my grade 8 exam which is booked for the end of March, then to concentrate on broadening the range of music I play, as I am hoping to study drumming within a music degree when I apply to University in a couple of years.

Obviously the dream is to drum with a successful band, however, I would be happy to make my living with anything that allowed me to use my passion for music.

Have you got any advice for other young people working towards a Rock and Pop qualification?

My advice would be to go for it, and don’t be worried going into an exam. The examiners I’ve found are nice people and it has always been a good experience. My other advice is to practice, then practice some more. 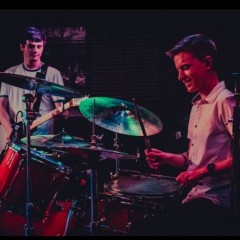 Harry is celebrated by Trinity for Artistic Achievement in Rock and Pop.