From photography to street-art and paintings that challenge the norm, we’re taking a look at the most provocative visual art of the last decade.

Visual art is everywhere: on our streets, in our newsfeeds and in our galleries. How can we reduce a decade to merely 10 pieces? I’ve endeavoured to do this decade justice by selecting works that dare to subvert the standard, represents the major news stories of our time, or give a voice to the oppressed. We would love to hear what’s been your favourite piece of visual art over the last ten years, so please do let us know! 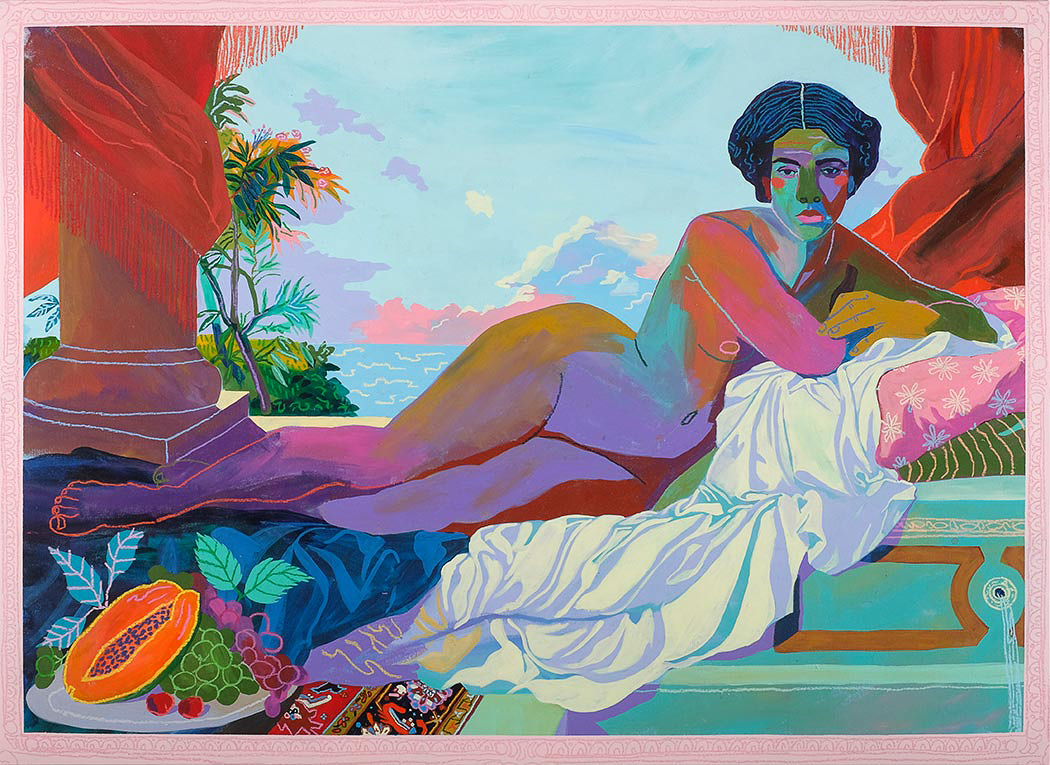 The aim of Andy Dixon’s work, which varies from murals to fashion pieces, is to subvert the traditions of an elitist art world. His work largely consists of scenes recognisable to the art historical eye, such as reclining nudes, fox hunts, and lavish Dutch-influenced still lives but each piece is reimagined with a twist.

Venus Painting certainly subverts the norm. Dixon denormalises white nudes by instead depicting a woman of African heritage, and creates an exotic setting in which to situate a classical nude. Dixon is subtle in using images to recall Classical iconography but uses his subject matter to reinforce the racial bias which still exists in the art world.

You can find Venus Painting and more of Dixon’s work here.

Whilst the Climate Strike protests have centred environmental focus on the world’s capital cities, artists Pekka Niityvirta and Timo Aho created this subtle installation art entitled Lines in response to the climate crisis.

Located in North Uist in the Outer Hebrides of the Scottish archipelago, a series of sensors were installed to interact with the tide, creating beams of light which represent the estimate of how high sea levels could rise if climate change continues at such a rate. The sensors activate lights that illuminate when a change occurs in the tide and water levels.

These yellow beams of light, cutting horizontally through the stone hamlets of a small island town, serve as a reminder to citizens about how climate change can and will affect physical location and surroundings. Unlike a social media post that people can scroll past, a newspaper article people can ignore, or a sign on the street that can be missed, a light installation has the ability to capture attention and feed imaginations, positively contributing to the 2019 environmental effort.

You can read more about Lines here.

Forensic Architecture, whose work was displayed at the Institute of Contemporary Arts in London, is a research agency based at Goldsmiths in the city. Its primary mission is to “develop evidentiary systems in relation to specific cases” and act as an “architectural detective agency”. This artwork is just one of many created by Forensic Architecture in the last decade to investigate Human Rights abuses and expose information about the 2014 conflict.

This interactive visual art which you can find here and here allows citizens across the globe to explore the Israeli strikes on Gaza in 2014 and inform themselves about the conflict. Forensic Architecture has created valuable work for the globe and continues to pursue Human Rights abuses today.

Image: A section from the Gaza Platform. (Forensic Architecture)

New York Times reporter Lam Yik Fei captured what has become an iconic image during the  Hong Kong protests in 2019. Not only does this photograph depict the struggles of Hong Kong citizens to maintain their civil liberties, it also echoes some Reconstruction Era photographs, therefore denoting two classes of people: the authority, and the ordinary citizen.

With arms raised in a stance of surrender and a jaw dropped to signal distress, the Hong Kong citizen represents the confusion and terror seen repeatedly throughout the protests. Not only does this denote the need for reinstated civil liberties, it also highlights a vital facet of the protests: a stand against police brutality.

You can find this image and read more about the Hong Kong protests here.

Cindy Sherman created an exhibition for the Museum of Modern Art in New York which was arguably the result of her long career discussing identity and representation in contemporary art.

Sourcing images from the mass-media and working as her own model, Untitled #407 in the 2012 MOMA exhibition was no different. With Sherman this time adopting a pose reminiscent of Italian Classicism, she subverts the patriarchal ideals of that particular era by being her own muse, advocating the notion of self-reliance. Sherman grew alongside the developing technologies throughout the 80s, 90s and 21st Century, with Sherman using photo editing tools to adapt her face into the most appropriate features.

You can find Sherman’s artwork at the Cindy Sherman exhibition here.

Banksy has long been known for depicting working-class or anti-government struggles, and his mural in Brooklyn is no different. This artwork is located in a deserted gas station in Brooklyn near Coney Island, where Trump owns real estate, and signals a comment on capitalism.

The work features a Wall Street stock market businessman in a suit and helmet, wielding an arrow representative of the stock exchange. The silhouetted grouping could signify the famous man-to-ape silhouette, signifying how the evolution of humans has created capitalism.

Banksy chose these fleeing silhouettes carefully and intentionally. Four children are shown, signifying the long term impact of free market capitalism on the next generation. The penultimate human figure is a soldier, provoking discussion into America’s veteran homelessness issue. Lastly, an elderly gentleman is featured, symbolising capitalism’s effect on all generations.

You can check out Banksy’s work in Brooklyn here.

The above painting, Tale of Three Cities, is one of eight triptych paintings in a series which aimed to depict the rich vivacity of Indian history and society. What is especially notable about Husain’s paintings is the sheer scale: each triptych is 12ft wide and 6ft tall, thereby allowing audiences to revel in the detail and vibrant shades.

You can read more about M.F. Husain’s work here. 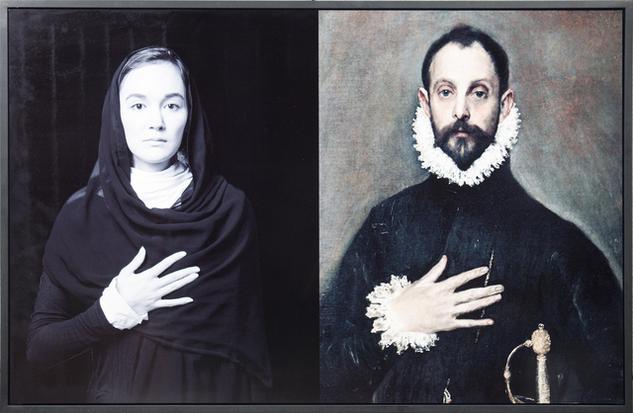 Shirin Neshat explores the role of women within patriarchal societies, and her artwork from 2018 does not disappoint. Renowned for her work depicting Persian and Iranian societies, Neshat takes an ordinary European 16th Century portrait and uses her typical black and white style to contrast patriarchal privilege with the role of Muslim women in Iranian society today.

The close detail to which Neshat has replicated the portrait of a Muslim woman is effective in rendering her posture both striking and resolute, in contrast to the 16th Century portrait, in which the gentleman is depicted as proud and authoritative.

You can find In Deference and more of Shirin Neshat’s work here.

Artist Rob Pruitt blended his signature pop style with impressionism in this epic work, The Obama Paintings. 2,922 paintings span the duration of Obama’s presidency, with one painting for each day of his time in office, and serve as a memento to his historic executive.

The work is a collection of small paintings: 2 ft x 2 ft canvases covered in blue to red gradient are then painted with white brushstrokes. Pruitt aimed to lend some personality to Obama by depicting intimate moments over national events. Whilst Obama’s first bill-signing is included, moments with family and down-time are more frequently recorded on canvas.

Pruitt began this project whilst Obama was still in office. The canvases are not displayed in chronological order, lending a sense of timelessness to his presidency, and suggesting that Obama’s legacy will last longer than his two office terms.

You can read more about Pruitt’s work here.

In Pursuit of Venus is Reihana’s moving image interpretation of the French artwork Les Sauvages de la Mer Pacifique from 1805. Whilst the two artworks are separated by over 200 years, Joseph Dufour used the latest innovations in printing to produce the French masterpiece, whilst Reihana used the digital technology of today to produce a video panorama filled with Maori festivities across New Zealand and the Pacific.

Reihana is keen to raise issues such as colonisation and cultural identity within a country that has officially been declared “multi-cultural.”

You can read more about Reihana’s epic video here and here.

All images used under fair use. 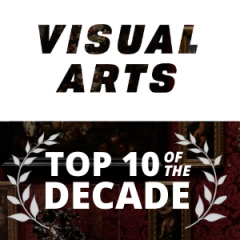 Top 10 visual artworks of the decade

From photography to street-art and paintings that challenge the norm, we’re taking a look at the most provocative visual art of the last decade.