As with my Top 10 of 2019 list, I have applied a degree of creative license to this list, and want to qualify my choices by explaining that while I may not personally like every game, or find them to be imperfect, the impact they have had on the industry and the medium are such that they have to be recognised.

We’ll start this list for a bit of love for the indie developers. Limbo can be seen as something of a rallying call of indie devs. A game that proved that artsy puzzle platformers were not only a fun game concept but also a surprisingly good way of telling a story. Alongside their more recent game ‘Inside’, Playdead create worlds that are beautiful and sinister, as well as being compelling platformers in their own right. The success of Limbo can also be seen as a catalyst for the huge explosion of indie games on the scene. Some of them, admittedly, failed to execute their concepts as well as Playdead (looking at you J. J. Macfield and the Island of Memories) but as a rallying call to indie devs that their games could find an audience among the snoring giants of the AAA developers Limbo is culturally crucial to the industry.

Minecraft is one of those games that needs no introduction. In many ways, Minecraft has become one of the defining universally understood icons of gaming this decade, right alongside Mario or Pacman. As of the latest Youtube Rewind, Google reckons that Minecraft gameplays have garnered 100.2 billion views in 2019 alone. It’s easy to see that its success has been meteoric. What’s more, Minecraft’s story is one of the more wholesome, in an industry often mired in controversy and misunderstanding. It is a game that can be enjoyed by adults and children alike, can be used as an educational tool, and caters to all sorts of playstyles, from those who want to enjoy building a little castle for themselves to those who want to try and build a working computer inside of a video game.

The Dark Souls series, despite being one of the most influential series in gaming, is perhaps one of the quietest on this list. The Souls’ fanbase is (comparatively) small, passionate, and not necessarily welcoming to newcomers. It caters to a methodical, tactical gameplay style and rewards persistence and obstinance in the face of overwhelming adversity. It is not a game for everyone.

So why does it have a place in this list? Two reasons. Firstly because it is the game that spawned the Souls-like genre. An often overused term and an honour which might in fact belong to its predecessor: Demon Souls, except for that Dark Souls very much polished the formula and opened it to a much broader audience. Yet it is a gameplay template which is still influencing games today, including From Software’s recent Sekiro: Shadows Die Twice and Star Wars Jedi: Fallen Order. Secondly, because this game in particular is a masterclass in word building through context, with basically no lore-dumps to speak of, Dark Souls unravels its narrative through its dark, somber, beautiful environments, weaving a tale of entropic decay and the decline of civilisation that the player can still uncover the details of even after several playthroughs.

This game is fun. Really really fun. That is, at its core, much of what games are about.

A wonderful puzzler and a truly funny game in a way in which few other games can lay claim to, Valve’s fascinating mix of physics puzzles and razor sharp wit make this a game that oozes joy. The gaming industry is one that often struggles with a dilemma; create a complex game that alienates newcomers or create a game that is shallow and bland that appeals to all; a dilemma that Valve has utterly sidestepped with this masterpiece. It also proved that in an industry often maligned for being overly focussed on violence that puzzlers didn’t have to be boring. So while its fans’ enjoyment of this game can be a little overbearing (memes about fraudulent baking abound) it is one of those games that I think you should certainly recommend as an introduction to anyone interested in the medium.

Skyrim is a game that deserves to be in this list for two main reasons: scope and longevity. The simple idea that if you can see a mountain in Skyrim, chances are you can climb it, revolutionised how open an open world could really be. Skyrim is also one of those games that pulls off the role-playing in a role-playing game. It has a central plot to be sure, but the true joy of Skyrim is the adventuring, the idea that you could discover a mysterious cave with a dark secret around any corner makes exploring the world the real joy of the game. A joy that is still very much alive and well now, eight years after its initial release. Despite Bethesda’s many many controversies in the interim period, there is still a devoted and loyal fan base to this game, and one of the most committed modding communities in all of gaming.

This is something of a personal pick. What I personally look for in a game is this nebulous idea of immersion; a world to get lost in. A game, like a novel, should draw you into the world it creates and allows you to marvel at this new place you find yourself in. However, some games do something different, making you challenge the very medium you are engaging with. This has led to many people hypothesising that gaming has been slowly entering an age of postmodernism, and if that is the case Spec Ops the Line can be seen as one of the earliest works in the genre.

Spec Ops is a game that is best enjoyed blind, so I won’t try and spoil anything here. All I can do is thoroughly recommend you play it, or look at the wikipedia plot synopsis if you are absolutely sure you’ll never get chance to play it personally. It is a game which takes one of the most established genres in all of gaming and makes the player really reexamine what they are doing within the setting, realising what happens when a consequence-free world suddenly is exposed to very real, very dark consequences.

The formula of the franchise is the same as it has always been: you are a ne’er-do-well, here is an open world to go ne’er-do-well in. However, once again the scope is a large part of what I think has made this game as successful as it is. It is a game in which players are free to do almost whatever they like, from racing, to playing golf, to doing yoga(!?). Once again, the modding community has also helped to transform this game, with one committed community dedicated to turning the game on its head, and playing as Los Santos’ dedicated police department, charged with arresting people for the same kind of crimes that the game expects and indeed encourages the player to commit. GTA V is an example of a true sandbox game, one in which players are given a world in which players can do anything, and a receptive fanbase that goes ahead and does everything.

This is one of my personal favourites. Mostly because I personally think this game has one of the most compelling narratives in the entire medium, one which makes you care about its characters in a way few others can lay claim to, a game which had me openly crying in the first five minutes. The Last of Us takes one of the most tired genres in all entertainment, the zombie apocalypse, and turns it into a compelling, character driven story about the relationship between father and surrogate daughter.

What is crucial to note here is that The Last of Us isn’t just a good story, it is also a fantastic game. Often the criticism leveled against narrative-driven games is that they sacrifice gameplay for story, yet The Last of Us manages to maintain both. The game succeeds at being a genuinely scary horror game, and a compelling action game, with some truly impressive AI for its time, whilst maintaining that crucial narrative element.

I want to lay my cards on the table right from the start: I hate Fortnite. I didn’t want to put it on this list. It is a game which I personally think defines much of what is wrong with the medium at the moment, how it is being highjacked for exploiting children and honing a mechanism of addiction rather than crafting an experience for players.

Yet that is also why I have to put it here. Despite all the cries from people like me that think this game is artless, abusive even, it is hugely successful. It is still a massive cultural influence today, especially among young teens; the people that in a decade or so will be creating the next generation of games. If this game is so successful despite our complaints we need to understand and unpack exactly why it is, and find some way to address it. While this game keeps earning awards and its abusive practises are kept quiet, that isn’t going to happen.

This game is truly a technical achievement for Rockstar. A brief look online will shore the ludicrous amount of detail lovingly piled up in this game. Make no mistake, this game has issues, for all its aesthetic beauty and complexity the actual combat is not far removed from its predecessor, and despite the well crafted story and characters it does feel like there is a token gunfight shoehorned into the end of every mission to try and convince players that they are playing a video game and not a movie – Kojima had the same issue this year in Death Stranding. However, as someone who looks for a world to immerse themselves into it is very difficult to not be sucked into the spaghetti western world of RDR2, it is as decadent as virtual worldbuilding can get, and definitely rivals The Witcher 3: Wild Hunt (a game that would have made this list were my praises for it not so similar) for one of the most stunning games of the decade. 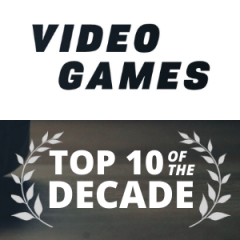 Top 10 video games of the decade