Voice MagFeaturesTop 10 films of the…

We've pulled out 10 absolute must-see films from the last 10 years of cinema. How many have you seen?

Each decade of film brings something new, and with films like Moonlight winning Oscars, so many new voices and stories are being brought to the table. So here’s a list of the best of this new and innovative decade.

Starring the leading man from The Raid (Iko Uwais), The Night Comes For Us is a brutal Indonesian action film about a gangland enforcer (Joe Taslim) who's hunted down by his crime family after betraying them to save a little girl. The choreography in this film is incredible, with people always finding inventive ways to brutalise their opponents. This peaks with a captivating several minute incredible one-on-one fight between Joe Taslim and Iko Uwais at the film's climax. Choreography aside, the film really embraces its melodrama, with a cast of unique characters that you can feel the love between. On top of this, there's a moral ambiguity to everyone which is genuinely interesting, forming a complicated, brutal but badass film.

Written and directed by Rungano Nyoni, I Am Not A Witch shows the journey of a young girl in Zambia as she’s exiled to a ‘witch camp’ after being (dubiously) accused of witchcraft. Rather than simply showing this as tragic, Nyoni gives the film an absurd humour to it. This ridicules some of the stranger ideas (like the white ribbons these ‘witches’ have to wear), whilst still acknowledging the real pain they cause. At the centre of this film is the women of the witch camp, all of whom welcome Shula (Maggie Mululbwa) with open arms. They all convey sweetness and heart, as these women find community and family in terrible circumstances. This warmth only makes the emotional gut punches hit harder, as Nyoni never forgets the dark and abusive nature of the circumstances, making the film as heartbreaking as it is warm.

Whiplash is a film that lives and dies by its sound design, telling the story of a young musician (played by Miles Teller) trying to become a better drummer, as he’s pushed further and further by his instructor (played by J.K Simmons). The music has a kind of manic energy to it (which is shared by the camera), giving the whole film an uncanny feeling. Crucially, the Hurwitz score pulls back at specific points, leaving just the drumming, or even silence, which is devastating in such a noisy film. Simmons and Teller match the manic energy of the music with phenomenal performances, as you see Teller drawn further into self-destruction by the abusive methods of his instructor. Whiplash has an almost grotesque feeling as you see abusive methods ‘work’, but in the finale which is meant to be Teller’s glorious moment, you wonder whether this was worth it at all.

In 2015, George Miller returned to his classic franchise and brought us the incredible Mad Max: Fury Road, bringing us back to that world from an entirely different angle. From the jump, this film brings aggression and tempo, with consistently brilliant stunt-work and special effects. Rising to this challenge is Charlize Theron, who easily steals the show from her (still) great co-star Tom Hardy, with her presence being incredibly powerful throughout. Furthermore, the entire film has a grim beauty, with a washed out colour palette that makes the wasteland visually stunning.

Sorry To Bother You is a film about a lot of things, but it centres around Cassius Clay (played by Lakeith Stanfield) trying to make his way in telemarketing. From top-to-bottom, this film is wild. The cinematography is manic, the alternate Oakland is wacky, and everyone gives brilliantly peculiar performances. This is especially true for Omari Hardwick, Tessa Thompson and Armie Hammer. Whilst this wackiness makes the film hilarious, the humour always makes a point. The surrealness means that when the film comes back to reality, the uncomfortable blows hit harder. Sorry to Bother You is punk, political and a hell of a directorial debut for Boots Riley – with a lasting powerful message.

Seeming to come out of left field, Jordan Peele’s incredible debut made a storm when it was released, and deservedly so. Get Out perfectly synthesises thriller and horror elements in an incisive and tight script which hits at how ‘nice’, liberal-minded people still can and do perform deeply racist acts. Our hero to take us through this environment is Daniel Kaluuya, who does a fantastic job of being both very relatable and conveying the horror of what he goes through. In Get Out, Peele shifts the typical perspective in horror to create a powerful and nail-biting film.

At first glance, this is a film about gentrification and the effect it’s had on predominantly Black communities, a topic which it handles exceptionally well. But when you dig deeper you find that there’s so much more to it, with Joe Talbot weaving in smart and interesting takes on masculinity, found family and our relationship to property. On a technical level, The Last Black Man In San Francisco is stunning, with an incredible visual poetry, alongside a fantastic score All of this comes together to take the audience on a rich, emotionally resonant and brilliantly performed journey.

Spiderman: Into The Spiderverse (2018)

“Anyone can wear the mask”. That’s the ethos behind this incredible animated film which takes a bunch of obscure alternate-universe Spider-people and throws them together in one big adventure. Each Spider-person has their own style ranging from the punk rock Spider-Gwen voiced by Hailee Steinfeld to the film noir Spiderman which is voiced by Nicholas Cage, but we rightfully center on the sweet and adolescent Miles Morales (voiced by Shameik Moore). What truly puts this film head and shoulders above the rest is its stunning visuals and stylistic choices, with the ‘What’s up danger’ sequence being one of the best scenes in a film that I have ever seen. Innovative and stunning – this easily swings its way onto my list.

Based off of Tarell Alvin McCraney's semi-autobiographical play, Moonlight is an incredible coming-of-age story. Broken into three, each stage of this film is acted fantastically, with Mahershala Ali, Naomie Scott and Jharrel Jerome all putting in incredible work supporting the three stages of Chiron (the lead). Throughout the film Barry Jenkins' direction gives everything a tender humanity and beauty. Furthermore, Moonlight covers issues ranging from addiction to masculinity to homosexuality, giving each its time in the sun but never feeling didactic. Instead the film works in nuance and ambiguity, leaving you with lots to chew on. Most importantly, Moonlight beautifully tells a story from a perspective that we almost never see, and managed to win Best Picture for it, potentially providing a new generation of filmmakers with the inspiration to tell their stories on the big screen. 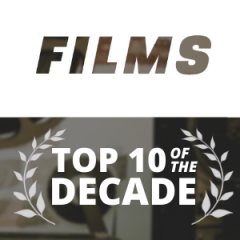 Top 10 films of the decade

We've pulled out 10 absolute must-see films from the last 10 years of cinema. How many have you seen?