The definitive lists of binge-watchable boxsets in 2019.

2019 has been a roller coaster year: from the climate crisis to the Conservative majority, it’s no wonder that TV has been the ultimate escape for us all. Netflix, HBO, Amazon Prime have churned out some of the best TV shows that all tell a different tale. My top ten is devoted to those that aren’t only binge-worthy but touch on some serious issues that deserve the spotlight.

Sheridan Smith (Cilla) plays Sam, a recent divorcee with a gambling addiction whose job as a cleaner doesn’t support her habit, or family. Forced to clean up the mess of people with more money than manners, Sam is fed up; so she plants a recording device and starts insider trading. It’s the kind of show that makes your heart race and your upper lip sweat because of how often she comes close to getting caught. It was highly entertaining and although she’s technically the ‘bad guy’, you can’t help but root for her.

Sex Education, if the cast had been all American, would not have made the list. Luckily it’s British and has that blunt, matter-of-fact quality that I simply love about British TV. Sex Education is about Otis (played by Asa Butterfield), an awkward teen who uses his knowledge of sex therapy, courtesy of his sex therapist Mother, to help his classmates navigate their way through the confusion of sex and relationships – whether they’re getting any or not. It’s funny, slightly cringey, yet relatable because it shows all the inbetween bits about sex and relationships that teens tend to shy away from.

The Act tells the true, tragic story of Dee Dee and Gypsy Blanchard, played by Patricia Arquette (Medium) and Joey King (The Kissing Booth). The Act is the story of an overbearing, abusive mother whose whole life is based on being perceived as the perfect mother, when in truth, she is anything but. When Gypsy starts to realise that her whole life is a lie, she is willing to go to extreme lengths to escape her mother’s clutches. The Act is a powerful depiction of mental health and abuse that adds to the narrative in a powerful and relevant way.

We all know the history of Chernobyl; a devastating nuclear disaster that resulted in a staggering number of deaths and casualties, at the hands of those in power, in one of the biggest cases of negligence of our time. The miniseries is executed brilliantly: from the acting to the cinematography, it truly is a must-see. Chernobyl is a story that no one asked to hear again in a hurry, but that unexpectedness adds to the impact it made. With a cast of British actors, dim lighting and eerie soundtrack, Chernobyl doesn’t sugar coat the events that happened; it came to shock and that’s what it did.

When They See Us (Netflix)

This Netflix limited series tells the story of ‘The Central Park Five’: five young black boys, all 16 and under who were coerced by the NYPD to confess to the rape of a white woman that they didn’t committed. From the first episode it was clear the next four would be watched through tears. It’s the kind of show that leaves you angry for hours after, especially because the US hasn’t learned anything from the case as the persecution of black men is as rampant as ever. WTSU is brilliant, raw and unbelievably devastating and it’s worth every tear shed.

Mental health, drugs, sex, violence and the general struggle to navigate life as a teenager are just a few of the themes that Euphoria executes with a perfect balance of shock factor and relatability. Zendaya (Spiderman Far From Home) shines as the bipolar, drug addicted Rue Bennett, who despite just coming out of rehab, can’t and doesn’t want to kick her habit because she uses drugs to feel alive. As alone as she feels in the world, everything changes when transgender girl Jules, Hunter Schafer, moves to town and gives Rue something else to live for.

The Netflix docuseries got harder to watch with every episode, but the necessity of this show’s existence trumps any discomfort you may feel whilst watching it. Survivor after survivor comes forward to shed light on the heinous acts of Robert Kelly, and as disgusting as they are, nothing is more shocking than the number of people he had aiding him in the destruction of so many young women’s lives. Surviving R Kelly is not only one for the #metoo era, but it should be the prime example for why you can’t, and shouldn’t, separate the art from the artist.

Living With Yourself (Netflix)

Paul Rudd (Anchorman) plays Miles, who’s stuck in a rut and willing to try anything to regain his old zest for life. After a trip to an exclusive massage parlour, he wakes up buried alive, only to return home to find a better version of himself in his place. LWY tackles male mental health in a subtle and honest way and counters the idea that the idyllic life is enough to keep you sane. This is Rudd like you’ve never seen before, as he smashes his debut performance as the main lead in TV series.

What happens when that beloved figure you’ve been watching on TV for years turns out to be a sexual deviant? The Morning Show explores the varying perspectives of the victim, the accuser and those around him who were grossly misled by his charm. Said to be based on NBC’s Matt Lauer, this is one for the #metoo era, in both the way it supports and criticises societies handling of the situation. The acting is strong all round but none stand out as much as Jennifer Aniston, as she escapes the confines of Rachel Green and blooms into the drama actress no one knew she was.

Emily Dickinson was an American poet, against all odds, who like so many classical heroes, was more famous when she was dead. Dickinson is played by Hailee Steinfeld (Pitch Perfect 2), who portrays the raucous, budding writer whose very existence goes against the times and the kind of daughter her parents want her to be. In this modern take on Dickinson’s life, Dickinson is reminiscent of our society today and has strong themes of feminism, LGBTQ+ and the need to challenge a woman’s so-called “place”. Steinfeld is very convincing in the role and has a devilishly, rebellious air about her that girls everywhere either relate to or admire. 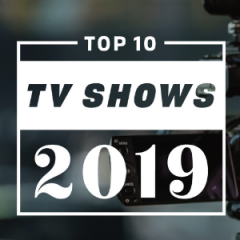 The definitive lists of binge-watchable boxsets in 2019.