Cia Mangat was a Senior Orwell Youth Prize Runner Up in 2019, responding to the theme ‘A Fair Society?’

Britain, I have given you everything yet you still call me ugly.

Britain, why must you spit at the black and brown men on your television screens?

I don’t want to hear about your love for

Britain, I know you love your Indian takeaways

When will you stop joking that my red bindis look like laser sniper targets to you?

Britain, are you jealous that I’ve got three eyes and you’ve got two?

Britain, I’m still waiting for my England to come home

vaporised into the mists of wartime smoke?

Britain, don’t lie to me

Britain begs the American outside his restaurant

for a pound with a coffee cup in hand

Britain I’ll kiss your feet if you comb my hair

Britain, the Empire’s striking back

God bless the NHS and all its phlebotomists

God bless the pearled old ladies who smile like clams

God bless your bus drivers with train tickets in their hands

for trying to teach me

how to respect the

Britain, you have given me everything

but I still think you're ugly 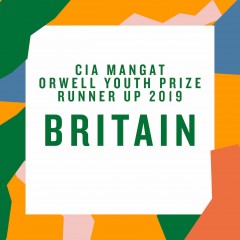 Cia Mangat was a Senior Orwell Youth Prize Runner Up in 2019, responding to the theme ‘A Fair Society?’