Clarissa Murphy was a junior Orwell Youth Prize Runner Up in 2019, responding to the theme ‘A Fair Society?’

From the damp doorway that he calls home, he stares at the outside world; with nothing more to his name than the grimy mattress and matted blanket beneath him, the clothes on his back and a battered paper Costa Coffee cup. The only sense of comfort for him is the feeling of the cold walls on his back that keep him alert enough to defend himself if needs be.

His favourite of a depressingly short list of pastimes involves vacantly watching the passers-by on their way to work, school etc. Groomed, middle-aged men in ironed suits stride to the tube station, a swinging briefcase in one hand and a constantly ringing phone in the other. Flustered teachers attempt to herd hoards of jittering school children across the zebra crossing on the way to some school trip that the kids will most likely spend playing ‘Truth or Dare’ rather than learning. Groups of sniggering teenage girls with short skirts and high ponytails gabble about the latest
celebrity gossip in Okay! that morning, completely unaware of and unconcerned about the slowly crumbling political system around them.

People are very fascinating to this man.

Strangers love to gawk at him as though they can’t comprehend how someone would ever stoop to his level and actually sleep on that filthy ground. Luxury is so relative in this world. The sense of satisfaction that most people get after having a nice meal at a posh restaurant for him is found by waking up to see it hasn’t rained overnight and he doesn’t have to sit in sodden dampness all day.

Parents hurriedly drag their dawdling children past him as though he is not even worth the glance of an unknowing 5-year-old. They keep their perfect creations of humans swaddled in bubble wrap, completely oblivious to the bad in the world as if that will somehow protect them from receiving the same fate. Ignorance is bliss.

He receives glare after glare as he drags at the cigarette he managed to buy with a few cobbled together coins. They do not understand how this stick of possible lung cancer creates a sense of warmth in his blood that is not really there. It wraps its toxic arms around him and shields him from the hunger and the biting cold and the loneliness of his reality, like the mother he never had. Everything good is nothing more than a mirage.

As the sun sets and the floods of figures finally begin to trickle out the quiet starts to engulf him. The only sound left to be heard is the last few pairs of shiny brogues knocking on the gum-ridden pavement.

The repetitive monotonous rhythm sparks a far-off memory from deep within him. Anxiety bubbles in his stomach as he remembers the sheer despair he felt as he knocked and knocked on what was once his own front door. Awful things, doors. Nothing seems more isolating to an already spiralling individual than the constant closing of a looming wooden slab.

When he can no longer take the pounding thoughts in his head and the crushing pressure of day he slips into an uneasy and dreamless sleep. He has wasted too much time dreaming about what could have been. So there he lies on his grimy mattress; bundled in his matted blanket, the empty coffee cup at his side. Beyond his damp doorway the world goes on. 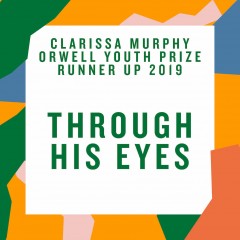 'Through His Eyes' - Clarissa Murphy

Clarissa Murphy was a junior Orwell Youth Prize Runner Up in 2019, responding to the theme ‘A Fair Society?’