Elizabeth Tappin was a runner-up in the 2019 Orwell Youth Prize.

Walking swiftly into school, Morgan clutched at his papers, holding them so tightly that his fingers turned white. He trudged along with the rest of the student body: heads low and shoulders hunched.

Black irritating strands of thread fastened his lips together. His brown hair was long and hung limp in front of his face; the fringe obscured his fiery eyes. The boy’s hands were littered with ink marks, giving them the appearance of being scarred and calloused.

It was just another day.

The morning passed without any noticeable incidents. Morgan joined his group of friends at break; they huddled in the corner of the playground. Communication was stilted as everyone stuffed their shaking hands in their pockets to protect them from the biting wind. One of his friends gestured at him and Morgan took out his writings from the safety of his bag. He handed them over with little hesitation.

“These are my peers,” he thought, “equals in nearly every way. They will consider my views.” Holding his breath, Morgan watched as his friend read the proposal. It was pointless of course, policies had to be discussed verbally and he wouldn’t be permitted to speak until his eighteenth birthday. Even then, there were bureaucratic hoops to jump through and impossibly high standards to reach if he wanted more influence than a tick in a box.

Morgan’s confidence rose when his friend smiled and started to hand the papers around the group. Everyone nodded and smiled in agreement. The threads tugged sharply as the corners of their mouths but they ignored the stab of pain.

Like a hive of bees, his friends flittered around and shared out the papers to those slightly older and slightly younger. The cold was forgotten as the flurry of activity and racing minds caused the young peoples’ blood to boil.

Morgan looked on, pride and excitement flooding his body. His friends pointed him out and pushed him to the front of the growing crowd. Being recognised for his work made him stand taller, something he never thought he would be able to do.

They left the school as one, and marched on to the local government building.

They felt like they could make their voices heard, despite their mouths being sewn shut, despite being young and naïve and despite the fact that they apparently hadn’t had enough experience to be of value.

An electric atmosphere engulfed them, powering their fever and determination. Other young people joined them; the purpose was explained and still they stayed. Some had markers, which they passed around and used to write messages on their foreheads (the spontaneity didn’t allow them time to bring signs). An ally approached Morgan and held the marker to his head; the sickly smell made him slightly dizzy but he nodded his consent. Biting their tongue, the person wrote in big bold letters:

No one could speak but their march wasn’t silent. Morgan joined the others in clapping and stomping their feet rhythmically.

However, as they were closing in on the government building, outsiders’ comments damped their atmosphere. Some of the older people looked on with disdain, muttering darkly about the “uppity children”. “Go-getters” others called them, smiling patronisingly; their support was superficial as they immediately crumpled the papers they were given. Morgan felt his heart fall as his work was discarded like rubbish.

The group gathered outside the building. Hours passed and eventually news cameras showed up. The reporters spoke to the onlookers, asking for their opinion. Their voices were broadcasted nationwide, contrasting views were given equal weight and debated by older people on the TV and Facebook.

“They didn’t talk to us,” Morgan noted sadly. He could see everyone else thinking the same as him:

“What was the point?”

We interviewed Elizabeth about her entry, and you can read the interview here. 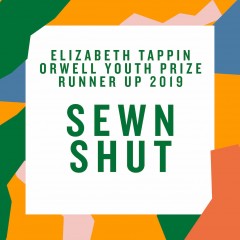 Elizabeth Tappin was a runner-up in the 2019 Orwell Youth Prize.