Jessica Johnson was an Orwell Youth Prize Senior Winner in 2019 for their short story, A Band Apart.

Nobody seemed to notice when Tommy vanished. James and I did, we’d known him since primary school, but no one else seemed to care. He’s not been seen since. There’s been a few rumours going around school about how he’s been spotted working in an office in Moss Side, which would be illegal considering he only got Band 3. His disappearance never sat well with James, but it wouldn’t surprise me if Tommy just left and never got picked up during the clearing.

It was our turn now. James walked beside me through the corridors, which had an almost clinical feel from the excessive cleaning that had been done in preparation for the news crew. It was far different from how it had felt for the past five years, aside from the loose wire hanging from the light fixture, which school still couldn’t afford to fix even though it appeared two years ago. James’ eyes flickered, glancing at every display and picture but not once at his envelope.

“You’re not even the one who should be stressing James. Just don’t worry about it.” I said, trying to reassure him, “I mean, Miss has been saying you should get Band 1 all year.”

“It’s not about that anymore is it?”, he snapped, “Doesn’t even matter what Miss said, Mum still thinks I can be a doctor, she doesn’t understand how hard it is to get into Band 1 for people like us.”

“Yeah hard if you can’t afford it”, I replied, trying to lighten the mood. It was one of our inside jokes that we’d had since the university scandal a few years back – before they decided to change the system to make it more ‘meritocratic’. James didn’t reply, his eyes fixed on his phone. “If you do get Band 2 it won’t be that bad, you can still get a decent job. It’s only Band 3 you have to worry about. No wonder Tommy vanished.”

“I don’t blame him”, James muttered as he started to walk towards his bus stop.

“Text me once you’ve opened it!” I called after him.

The weather was dreary as usual, the clouds painted the sky with a murky haze and a sharp wind nipped my fingers as I walked home. I wasn’t expecting much, there was no way I could get into Band 1 – hardly anyone did from round here – and even Band 2 seemed out of reach because I’d never been that clever in school, especially compared to James. Since the tests in Year 6 he was miles ahead of everyone else, in science particularly. Never failed to help anyone though.

By the time I arrived home, Mum was already at work, but Dad and Nan were in the living room with the TV blasting at full volume. They had it so loud that neither of them had noticed me come in.

“So, you’re telling me that you have to be a teacher if you get put in the second Band?” Nan asked, peering over her glasses as dad sighed.

“No. There are other jobs too like administration and accounting, you don’t have to be teacher”, he explained.“So then why does everyone in the third Band have to work in those internet warehouses or be left with nothing?”, she nagged, “I don’t want our Jake to be left with that, I thought those robots did it all now anyway!”.

The argument didn’t seem to be ending, so I gritted my teeth and went into the living room. “Oh, look who it is! What did you get Jake?” It was no surprise that Nan was the first to ask as the tension disappeared, replaced with a flicker of hope. “Not opened it yet”, I replied, as I slumped onto the settee. Deep down, I already knew that whatever result I got, nothing I ever did, or could do would change the Band I was assigned, but they didn’t understand that.

The news on the TV blared in the background, “The controversial Band system enacted just two years ago in 2027 was designed to find the most capable…” They started reeling out statistics about the number of Band 1 students, apparently on the rise this year, although hardly anyone from our school had managed it. “And now, reporting live from a local grammar school in Buckinghamshire, where a record 87 students have placed In Band 1 this morning. So…”

“Well go on then”, Dad said, giving me a nudge. Slowly, I tore the seal of the envelope and peeked inside. ‘BAND 2’ was stamped across the sheet. It was difficult to miss, as was my huge sigh of relief. I was safe. Free from the fears of being trapped in the ‘underclass’, which was what everyone at school called Band 3 students.

“Band 2!” I said, unable to hide my smile. The newsreader continued: “Charity groups fear more student disappearances, but government officials insist…” I tried to ignore it and texted James.

The wait seemed to last forever. ‘2’, he replied eventually.

‘That’s pretty good, right? We can go to the Work Bureau together. I told you you’d be fine!’

James didn’t reply, and I didn’t think much of our conversation – after all, Band 2 was great for us. It meant that we could choose between a few jobs and we could stay in education for a bit longer, which was much better than we expected.

That morning, time seemed to pass so quickly. Dad made a big fuss about my Band and I’d forgotten about my conversation with James. It was hours later when we heard a faint knock on the door. I rushed over, hoping to see James, but instead I was shocked to see his mum, Julie.

“James isn’t here, is he?” she asked, her voice trembling.

“No, I texted him a few hours ago though, why wha-”

“I haven’t seen him since he went to get his results…he’s not come home. Did he tell you where he was going?” Her voice cracked, and her eyes flashed with fear as the uncertainty of James’ situation dawned on her.

It had dawned on me too. I grabbed my phone and headed outside to call James. No answer. I started walking, trying to think where he might go. Surely James wouldn’t do the same as Tommy? He always insisted, or perhaps boasted, that he didn’t really care about the band he got.

I passed our old primary school. James had been quite sure of himself back then, he’s changed since the Band system started. Before I knew it, I’d walked to school, where flocks of people gathered around the TV crew. Maybe James was there, waiting to be interviewed. I pushed my way through the crowd – he wasn’t there.

They were talking to Josh, who moved to our school halfway through the year. It looked like he had just become the first Band 1 student our school had produced, even though he was nowhere near as smart as James. Apparently his parents were lawyers though, which wasn’t hard to tell as he was driven to school in a brand new car every morning.

For a second, I thought about getting in front of the camera myself. Maybe if people knew why students were vanishing and that they weren’t just numbers they would care more. But I couldn’t. Freedom of speech is real, but freedom of opinion is not. As I backed away I checked my phone. Still nothing from James. I started to walk back home, hoping that he had turned up. Hope. It became clear to me then. People who had hoped for a better future than what our parents had, like me and James, were never meant to be in Band 1, just like Josh would never have been in Band 2 or even Band 3, like Tommy.

Tommy. The thought of him suddenly made my blood run cold. He was just another statistic. We all were.

Including James. They found his body whilst clearing the woods the following day. He’d left a note with just two words: ‘Sorry Mum’.

“Do you want a brew Jake?”, Nan called from the kitchen, “It’ll make you feel better”.

“Not really” I mumbled whilst flicking through the news channels. She soon came into the living room with a mug of tea, glancing at the TV as she sat next to me. “Cheer up now, at least you got the band you wanted.”

The news droned with statistics. James was one of around 5,400 this year, but even this figure seemed played down. It didn’t take long for people to forget him. He was a normal case; the news was only concerned with the ones who made the band system look good, the ones who made it.

They couldn’t choose either. None of us could, our futures were fixed. They always were.

We interviewed Jessica about their entry, and you can read the interview here. 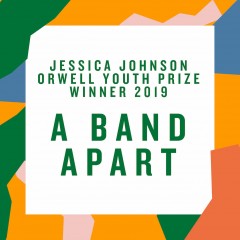 Jessica Johnson was an Orwell Youth Prize Senior Winner in 2019 for their short story, A Band Apart.