Mark is celebrated in the TrinityTalent | Class of 2018 for Musical Achievement, Creativity, Progress and Leadership

Mark has been nominated by music teacher John Tierney for passing his Grade 6 drums exam with distinction. “Mark has proven himself to be a student with an insatiable appetite for music,” says John. “He began playing drums in October 2016 when he had his first lesson at Rhythm Drum School.”

Every week Mark attends two classes at Rhythm drum school. “One is his own private lesson and the other is a group lesson studying the classic text 'Stick Control' by George Stone,” says John. “Mark assist others in the class with technique thereby passing on his own experiences in the pursuit of excellence. Mark has never missed a lesson.”

Mark started playing drums in 2016, studying the Trinity grades at Rhythm Drum School in Galway. With the structure of the syllabus – and under the guidance of his teacher John – Mark says was able to go through the grades fairly quickly. “All of a sudden I went from feeling completely incompetent to being very comfortable playing drums. After studying drums for just over a year, my band 60 Watt Girl won the Irish Youth Music Awards 2018.”

Mark is now studying Trinity Grade 7 and applying for a four-year degree course in drumming for college next year. “None of this would be possible without my studying of the trinity syllabus. And I know, without a doubt, that if it weren’t for the skills I had learned through the Trinity grades to that point I wouldn't have been a solid enough drummer to cut it at that standard.

“Learn every piece in the grades, regardless of whether you have to perform them all in the exam. Some people skip certain pieces because they don't like the style or don't think they'd want to play something like that, but if you study every style through the pieces provided you become a much more proficient and well-rounded musician.

“It's amazing to have a course available that covers such a broad range of styles increasing in complexity from the ground up. Take advantage of that opportunity and it'll serve you well. Beyond that, all I can say is practise, practise, practise. The more focused time you put in, the more you progress. This makes it all the more rewarding and enjoyable!” 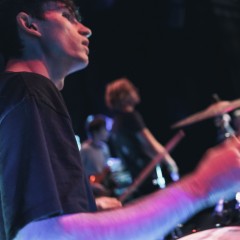 Mark is celebrated in the TrinityTalent | Class of 2018 for Musical Achievement, Creativity, Progress and Leadership