Finn is celebrated in the TrinityTalent | Class of 2018 for Musical Achievement, Creativity, Progress and Leadership

Finn has been nominated by the Head of Percussion at Merton Music Foundation, Lilia Iontcheva, for passing his Grade 6 drums exam with distinction. “Finn’s achievements and progress in drumming are just extraordinary,” says Lilia. “It’s been a pleasure to watch him grow as a musician.”

Finn says that, through completing his Trinity qualifications, he has been given the chance to improve his technique: “I have honed specific aspects of my playing: different feels, time signatures, exploring the drum kit as an instrument in unique ways. Through this, I have become a much more rounded musician. The pieces within these exams provided the starting blocks I needed to start delving into different areas in music, acting as an introduction to the different grooves and stylistic elements common to different genres. Now I’m closer to discovering the kind of music that I truly connect with the most.”

Finn’s advice to fellow Trinity students? “I believe not rushing through grades to be quintessential for your development as a musician. Taking the time to work through all the pieces, even if you aren’t playing them, can often provide a much more balanced progression while working through the grades. Also, applying what you learn from the grades to your playing makes the studying worthwhile.”

“A large part of these exams is being convincing and persuasive towards the examiner. Making the examiner feel the emotions what you’re trying to express through your playing is the ultimate goal as a musician, to express these feelings in forms of tonality, sonority and rhythm.” For this reason, Finn’s musical taste has veered towards jazz and its various sub-genres. “It’s the appreciation of emotional performances [which is important] – being highly involved in different musicians’ interactions and learning to have conversations through the music.” 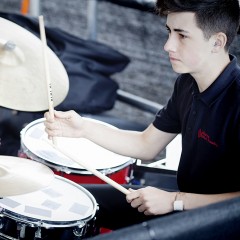 Finn is celebrated in the TrinityTalent | Class of 2018 for Musical Achievement, Creativity, Progress and Leadership