Esther Doggart has been nominated by music teacher Sally-Anne Brown for passing her ATCL recorder exam with distinction. Sally-Anne says that Esther’s achievement is the culmination of many years of outstanding attitude towards practice and her enjoyment of music and the recorder itself: “Beginning music classes at the age of two with her mother, she started recorder aged five and worked her way up through the grade exams, joining me for her Grade 6 onwards. Throughout she has shown great maturity towards practice.”

Esther says that having a concrete goal, such as the Trinity exam, forced her to knuckle down and practice: “Even on days when I seemed to make no progress at all! When you practise like that, you end up playing in all sorts of emotional states, and it was fascinating to see how my emotions affected my interpretations of the pieces I played, which I then channelled into a more successful performance.

“Having music as a near-daily part of my life has made me realise how much I value it as an outlet for my emotions, creativity and focus. The discipline and appreciation of music (and enhanced dexterity!) preparing for this exam has given me helped improve on the other instruments I play. It also taught me how to cope with juggling the amount of work I have in the run-up to A-Levels.”

Esther’s advice to other Trinity students?
“Enjoying what you play is key. If you love playing your instrument and the pieces you play, then practising regularly (which is really important!) doesn’t seem like a chore but becomes something to look forward to. You also become more comfortable and confident playing your pieces, which helps with exams!” 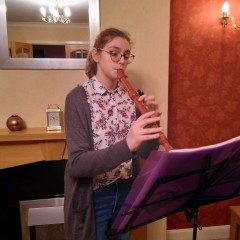