Voice MagFeaturesThe best of music in…

Music is good for the soul - and made 2018 all the more bearable!

With top 10 lists, especially with artforms that have metrics like music, it would be very easy just to find the most streamed tracks and list them for you. But even that could be considered overkill, as Spotify even generates the playlists for you now.

So instead, I have decided to take a wider view of the music industry for this list, and present some of the biggest, interesting, or outright bizarre things that happened in music over the last 12 months...

...And then I embedded the Spotify playlist. Look, just because I said it’s easy, it doesn't mean I'm above doing it!

You can’t write about music in 2018 without mentioning one the industry’s most controversial figures.

It has been an interesting year for Kanye (Ye?) West. The artist is known for some outrageous behaviour and comments, but 2018 he really came into his own. There was the comments about slavery being a choice. There was the on-again off-again relationship with social media. The declaration he was writing a philosophy book. The release of an album, and the delay of another. He produced four other albums that released this year too. He threw support behind Trump, and met him at the White House in a bizarre meeting. Sounds like a lot? That’s not even half of it! I could fill a whole top 10 with Kanye events and have spare anecdotes, but luckily I don’t have to, as TooFab have done it for me.

Taylor Swift continues to demonstrate her influence on the world

The global pop star has had an equally interesting year as her rival, West. The two found themselves at opposite ends of the political spectrum this year as she came out publicly supporting the Democrats during the mid-terms, and Kanye obviously wanting to #MAGA. Her influence was felt though when she posted a lengthy Instagram post encouraging people to register to vote, which resulted in a 65,000 spike in registrations in following 24 hour period.

Swift moved over to Universal Music, but did so on the condition they agree that any future sale in Spotify will lead to a payout to all their artists. It was announced that she will be playing Bombalurina in a movie adaptation of Cats.  Her current tour, Reputation, is also making an impressive amount of money, having apparently grossed $345.1m. It was reported that she had installed facial recognition software at her gigs to help identify known stalkers. Reputation is also going to be shown on Netflix. Oh, and Reputation also was named Billboard 200’s Top Album of the year - the third time she’s won the honour, and only the second time ever that a performer has won it thrice.

Ed Sheeran makes all the money

Swift’s tour might have sold out, but it was Suffolk boy Ed Sheeran that breaks the record for highest grossing tour. Divide has grossed $432m in ticket sales throughout the year, which is now the record for earnings in a single year. The Independent states that Sheeran apparently sold 4,860,482 tickets across 53 cities and 94 shows.

I’ll tell you what I want, what I really really want! A Spice Girls reunion! Not really, but I have tickets nonetheless. The 90s pop sensations are back, minus Posh - who instead has launched a YouTube channel for fashion tutorials.

The sale of the tickets broke Ticketmaster sale records, wit millions looking for tickets and apparently the digital queue had 700,000 people in it at one point. The nine initial dates very quickly sold out, and five more dates were added in response. These also had very high demand and a sixth date was added for Cardiff’s Principality Stadium on 27 May 2019.

I’m beginning to get a little bit worried about Elton John, is he running out of money? He was in Kingsman 2, he participated in the (underwhelming) John Lewis advert, he’s in a Snickers advert, and he is doing a farewell tour that spans the next three years and has over 300 shows! There is even a biopic of his life due to come out in 2019, starring Taron Egerton and produced by the same people who did Freddie Mercury biopic.

The star is retiring from live performances, but having recently signed over to Universal for all future music releases as well as his back catalogue, it doesn’t look like he’s ready to close the piano lid for good!

Speaking of the Freddie Mercury biopic, it has knocked Straight Outta Compton off the top spot for highest grossing music biopic worldwide. The film, starring Mr Robot’s Remi Malek, has pulled in $386 million in the global box office, and is still showing in cinemas at time of writing. Bohemian Rhapsody has been nominated for both the Academy Awards and Golden Globes, as has Rami Malek.

As a result of the film, Queen’s Bohemian Rhapsody has become the highest streamed 20th Century song, according to Universal Music, having been listened to over 1.6bn times.

Streaming services really disrupted the music industry when they first came out, but have now become accepted as commonplace. So much so, that their listening figures are included in top album and single charts. Drake was the most streamed artist in the UK and worldwide after the release of Scorpion, his fifth studio album. His single “God’s Plan” was also the most listened-to track of the year, with over 1.1bn streams. Post Malone was second.

Yes, believe it or not, Spotify announced that they were allowing users to input their data from AncestryDNA and get music playlists generated based on your family tree and genetics.

The headline was slightly more dystopian than the reality, which had users manually inputting the data from AncestryDNA into the Spotify playlist generator, which then created music based on regions, but nonetheless it was an eye-opener for those who were privacy conscious. It has been widely reported that getting your DNA sampled gives these for-profit companies license to use the DNA for whatever research they like, and partnering up with Spotify to make that more appealing felt slightly insidious. There are also questions to be raised about how companies who have such intimate and personal information about individuals can partner up to share that data.

We Built This City… On Sausage Rolls crowned Christmas number one

Abandon hope all ye who enter, as a cover song of Starships 1985 record was released with lyrics dedicated to the greatness of sausage rolls, and it actually reached number 1. The YouTuber-cum-singer LadBaby, whose real name is Mark Hoyle, managed to beat out efforts by Ava Max and Ariana Grande to take the top position with the frankly awful song, and continues a British past-time of elevating parody or otherwise terrible tracks to the Christmas charts.

However, all the proceeds from the sale of LadBaby’s debut chart topper are being donated to The Trussell Trust, a foodbank charity that has a network of over 420 foodbanks across the UK.

What do you mean it’s nepotistic to include an Arts Award alumni in the biggest news stories of 2018?!

Gold Arts Award alumni Chris Hill was selected to be the recipient of a Ten Outstanding Young People Award, alongside a nobel peace prize winner and comedian Russell Howard. Chris was chosen for his outstanding contribution to music, as being above grade 8 in over 10 instruments, and holding two Fellowships for flute. He has raised thousands for charities and has shows scheduled two years in advance - good job Chris! 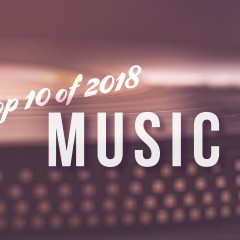 Music is good for the soul - and made 2018 all the more bearable!