A list of 5 of the best role models for encouraging feminism in young girls, in celebration of Women’s History Month- looking out for the icons of the future.

During this year’s Women’s History Month, of course it’s important to celebrate all the fantastic women throughout history who’ve made our world what it is today. But is it not equally important to celebrate modern role models, who will be the very same women from history in years to come? Below is a list of five of the best positive modern role models for young girls – and I’m glad to say that it was a task and a half to pick only five, amongst the abundance of inspiring women from all corners of today’s society.

The 13-year-old, of Stranger Things fame, has emerged as the unlikely standout feminist role model of recent years. After her tremendous TV success, and accumulation of a staggering net worth, she now uses her power as an influencer as best she can. Her entire online persona is dedicated to spreading positivity and encouragement; a standout moment being when she spoke about her experience shaving her head for her Netflix role. She reflected in an Instagram caption-

‘I have a job to do, and that is to inspire other girls that your image or exterior part is not what I think is important. What I find important is caring, loving and inspiring other girls.’

The online world can be a dangerous place for young girls, and having somebody of their age on the trending tab spreading this message is invaluable. She has spoken on several issues, for example the #TimesUp campaign, in exactly the right tone to ring with her young audience. Alongside this, she’s a young ambassador for UNICEF, encouraging her followers to educate themselves and donate to charity as she does – all at the tender age of 13!

In the 10 years since Barack Obama was elected, and so since Michelle Obama has been equally as visible to the public eye, it has become increasingly clear that she is not to be known as simply ‘Obama’s wife’. In 2015, she headed up the international ‘Let Girls Learn’ campaign, which aimed to help girls enrol and succeed in their education system. She has since been hugely vocal about her views on such matters. For example, in one speech, she thanked Hillary Clinton for making sure that ‘her daughters can now take for granted that a woman can be the President’.

She has been equally as forthright about deep-rooted American racism; addressing the slavery that the country was built on, and essentially forcing people to get their heads out of the sand – a vital move from such an influential figure, especially considering the current political climate. She has become so influential that many people hope she might run for president herself one day, and I have no doubt that a great many young women will be behind her.

Malala hardly needs an introduction, as I’m sure you’ll agree. Without a doubt the most recognisable female name and face of the 21st century, the 20-year-old Pakistani activist made history after becoming the youngest ever Nobel Peace Prize winner. Whilst studying in Pakistan, she directly defied the Taliban over the state of women’s education in the country and survived a consequent shot to the head. She has since written a bestseller which sold over 1.8 million copies internationally, and continues to work alongside the UN on issues of equality, child poverty and education alongside studying the prestigious PPE course at Oxford University.

Laverne Cox, best known for her role as Sophia Bursett in the Netflix original ‘Orange is the New Black’, takes the crown for the most influential modern transgender woman in many people’s eyes. She established her presence with the boom of the Netflix show, and used her role to educate people on transgender issues, drawing some parallels to her own life in her emotional storyline. Since her rise to fame, she has been the first transgender woman to be nominated for an Emmy award, and appear on the cover of both Time and Cosmopolitan magazine, whilst using the attention she has received to speak out about LGBT+ issues, and her own experiences as a transgender woman in the industry.

Ashley Graham is the most well-known plus-sized model of today’s industry. Scouted at only 12 years old, she has dedicated her career to shining light on body-positivity campaigns, and inspiring activism on the topic. Her 2015 ‘Plus-size? More like my size’ TedTalk has so far amassed 2.4 million views, proving that a role model like herself is much-needed for today’s young girls in a world full of size 2 Instagram models and FitTea brand deals. She was also the first plus-sized model to appear on the cover of Sports Illustrated’s Swimsuit edition, and continues to push for the acceptance of size diversity in what is still a very narrow-minded field. 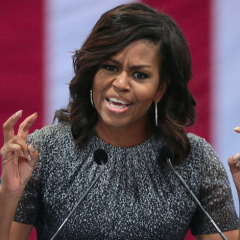 A list of 5 of the best role models for encouraging feminism in young girls, in celebration of Women’s History Month- looking out for the icons of the future.