A rundown of the best TV, film, music and live performances from the past year

At the end of every year we have a tendency to forget everything that happened in the pursuit of a fresh start.

2017 is quickly coming to a close, and despite a tense year in many respects, there has been some fantastic cultural works that were contending for your attention.

With everything that has come out this year, you potentially missed something that was worthy of your attention. It would be untenable to try and list everything that came out, so instead we have come together to look at the contenders and, after some extensive debate, have managed to whittle the back catalogue down.

We have written a number of lists that detail the best of 2017 in television, film, live performance and music, and will be releasing a new Top 10 every Friday in December!

But we are far from omnipotent, and love listening to what you have to say! Therefore, we extend an invite for you to tell us what your best releases have been over the last 12 months. There may be something that is unintentionally remittent, and we absolutely welcome new suggestions for content we might enjoy.

So while we don’t want to keep you on tenterhooks, you might want to fasten your seatbelts and get ready for four weeks of nostalgia fuelled excitement as we look firmly at the past and enlighten you with the best stuff to enjoy over the festive period! 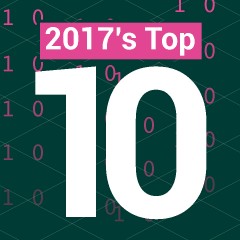 A rundown of the best TV, film, music and live performances from the past year