In three weeks' time, a charity called Building Heroes was doing a practical course on property maintenance. It wasn't officially part of the resettlement programme, but it lasted five weeks and covered more that the 'official' three-week course. I made sure to be booked on the course.

While there I learned the basics of bricklaying, carpentry, plastering, plumbing, tiling, painting and decorating. The course is free and only open to people in their last six months of military duty, or veterans. It wasn't the resettlement process most folk follow, but neither were most of the things regarding how I came out, so it seemed kind of fitting I went on this course. I learned a lot and managed to pick the skills up fairly quickly. Somewhat surprising to even me, I actually had a fair ability as a plasterer - a skill I'd never tried before.

Since the medical board, my state of mind had been in constant flux. In times of stress I'll admit I didn't feel great, and then there were the good times where I felt ok. I've been doing a lot of personal development to get to grips with the social anxiety, I'm not perfect with it yet, but I am certainly a lot better. Its only noisy busy places like pubs that can leave me feeling like I want to run away. A little bit of forward thinking and planning avoids most uncomfortable situations. As for my Black Dog days, they will never leave me I think, but I've enough tools to tame the beast when he comes to stay. For those who don't understand the way I, and a surprisingly large section of society feel, there's a good video by the World Health Organisation called Black Dog. It's available on YouTube.

By the end of May my days in the army had concluded. The uniform was handed in, paperwork was completed, and my ID card was handed back as the symbolic end of the era. Away I walked and I haven't looked back. I've faced similar challenges to most other folk leaving the army. Trying to understand how civilian organisations work when they are so inefficient. Establishing where the new boundaries of taste and decency lie, because civvies can be so precious at times. Trying to kerb my tendencies to swear so as not to upset the locals in my vicinity. Getting my head round the concept of anyone using the words 'I'm offended' is just making a petty whinge to get attention. Learning stuff a grown man of the age 40+ should really understand like how to get a dentist or doctors, and so forth.

Editor's note: Living with a Black Dog can be found here 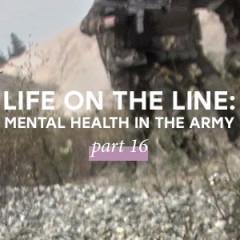