During the in between time of seeing the mental health team, my ex-wife had maintained a stance of being as difficult over the break up as possible. I had started divorce proceedings based on legal advice I had received, and this had not gone down well. I was informed at the start of applying for divorce it should take between six to nine months for a normal divorce to go through. When finally completed, mine had taken 3 ½ years to complete, purely as a result of her trying anything to stall the process. In the mean-time she was abusive towards me. She regularly threatened that I'd never see my son again, that I'd be left destitute once she took any assets I had, as well as a couple of things that mean I will never be able to forgive her. It was more stress and I'd reached breaking point.

I had also progressed within my career working on aircraft but had started making mistakes that were borderline dangerous. However, rather than looking deeper into the cause, it was a case of being disciplined, then educated a bit and put back in the same position to make another mistake. Then the cycle would begin again.

I'd gone out on the last Afghanistan tour the army did, and was having problems with someone of the same rank deciding to try and bully me. This was spotted by my superiors and dealt with, but before it was resolved I swerved and re-evaluated my no suicide policy. Every soldier out in Afghan carries a rifle and about 120 rounds of ammunition as a minimum; it would be a pretty easy option to do.

A close friend of mine who was out there with me was having his own difficulties, in his case PTSD, something he was diagnosed with while out there. Rather than send him home to proper treatment, I was asked to look after him. I did my best, but it wasn't helping me. The only minor highlight was my divorce got finalised while away.

I eventually went sick with a minor case of the runs. They confine you to a contagious people's room and let you ride it out until you've had a day with no problems. I was placed with the task of getting my meals from the cook house, and discovered that I could get all the fresh orange juice and dairy products I wanted over at the American dining facility. This was good because the two things that will prolong a dose of diarrhoea are fresh orange juice and dairy, as they feed the bacteria making you sick. So, I gorged on milk shake cartons and fresh orange juice at separate times of the day to keep myself sick. Doing this I was able to keep myself out of the way for almost two weeks.

Needless to say, I was not in a good way when I got back, and I was not coping well at all. I wrote a letter with all the things that were factors in me feeling like crap, and after talking to the same friend again, they convinced me to seek help. I didn't really have much hope for it. I was directed to the doctor who listened to me and read my letter. I was given a week off so I could get away from work, some low dosage antidepressants to take, and then sent back to the mental health team in Colchester. I was dubious about taking antidepressants due to the numerous stories abound about folk who come off their meds and become a danger either to themselves or to others. However, she explained they were different kinds of drugs, so I gave them a go.

The person I was seeing at Colchester was really good and took time to really dig into my problems. Quite quickly my dosage of medication was upped to the highest strength they are able to keep a person on for long term, and identified my depression and my social anxiety. Initially we worked on the depression as that was more debilitating for me, later working on my confidence and reducing my anxiety in social situations. For almost two years I had weekly one to one sessions working on sorting out the mess that was my life. Eventually I came to terms with elements of my life I had no control over. Sometimes you've just got to be a bit Elsa about things and let it go.

In the army, taking the meds and getting the help means they grade you medically unfit for certain things. My personal grading stated no going away, and no handling weapons of any kind. I've since met a chef whose grading specified no handling knives. My home life was a bit more stable, but certain people reacted unsympathetically.

I remember the main group I worked with were going away on a two-week military exercise, and there were half a dozen of us who for various medical reasons weren't allowed to go. What they did initially was get hold of a load of cheap magnolia emulsion and expected us to paint all the offices – which technically isn't allowed, as such work has to be done by civilian contractors. There was also an instruction that a phone which was never normally manned 'just in case' was to be supervised 24-hours a day. This was not allowed, as by law you can't have a single person working in an industrial building alone - plus we were all there for various medical reasons. The intent behind these moves was obvious, we were being punished for being ill. After a little negotiating, I got agreement that we leave a set of mobile numbers for 'just in case', so we were available if needed.

They never did call. 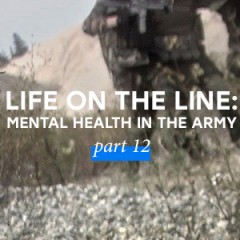