That night was not a good night for anyone. There was no more big argument, I went upstairs, packed a few clothes and slept on the sofa. In the morning, I moved back on the camp and took a room for myself. I got my room key, moved in and basically slept and cried for 3-4 days non-stop. I was lost, bewildered, scared.

I tried to do simple things like go to the cinema alone. I felt scared of the people there, stayed in my car for half an hour and drove home. Often, I tried going to several other mundane things like parks or shopping and felt a real aversion to being around strangers. I took to visiting supermarkets after midnight so there weren't too many people around me.

Any number of normal social scenarios I'd have gone to as a family now felt uncomfortable. I would experience a physical sensation under my skin, almost like insects burrowing around, giving me weird feelings in my flesh. I'd also feel a bit light headed, almost dizzy, and eventually break into a cold sweat at the thought of going out. But the thing that became obvious to me after about a week and a half was I felt happier when she wasn't around me. In a room by myself, I felt calmer, safer.

I'd been having thoughts about would the world be better if I simply wasn't in it. They weren't suicidal, more just questioning if I of any use - I wasn't convinced I was. I still think of it more in terms of if someone offered me a place to live and I could just disappear, would it matter to anyone? I had concluded it wouldn't. The low feelings weren't going away, although it did feel better to be away from my wife. The army in keeping with its policy paid for six sessions with a therapist dealing in broken relationships, and we both agreed to attend them. The dawning realisation for me was I didn't want to get back together with this woman that had poisoned my life and left me broken.

I think it was about the third session when I came out and said that I couldn't see a way of carrying on unless there was a magic bullet for our relationship. Our therapist informed me there was indeed no magic bullet, I finally admitted both to myself and my wife that there was no way I could see me getting back with her. I asked if the therapist could help us figure out how to be civil during out split up. She assured me she could help a lot with that kind of thing, and it was one of her specialities. The next session my wife didn't show up, and mentioned by text something about being sick of attending meetings.

After that my now ex-wife made everything as difficult as possible. We would arrange days on weekends where I could have my son for the day, then she would disappear for the entire weekend back to her family. She would block access to me getting the things I needed out of the house, such as uniform or other personal possessions. This was causing me immense stress which was making my depression worsen.

I finally talked to a friend about the troubles I was having about 3-4 months after the split, and how things were being made deliberately difficult for me. Through their own personal experiences with mental health issues they told me I needed to go and talk to the medical centre.

So off I went, and got talking with one of the older nurses. After hearing me out she found a spare doctor's appointment same day, who directed me to the mental health team at Colchester. I saw them within a couple of weeks for an initial appointment.

They are all mental health professionals, and used to dealing with a wide range of problems. Initially I was diagnosed with having an adjustment reaction – basically a difficulty dealing with change in my life. I don't blame them for making that diagnosis. My breakup was very much a new thing, and full of daily frustrations. In fact, this was the thing that made my blood boil on a daily basis, so I talked about it whenever I was asked. But what I'd been going through had been happening a lot longer.

After 2-3 months, I was discharged from the mental health teams care. I was left to drift again for another couple of years with no follow up checks, but nothing had improved significantly. 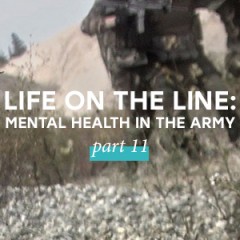