On arrival in Kuwait it was chaotic, with lots of people making land grabs for good places to live and get setup. As Ghurkha Engineers, we had the task of building a fully functional field hospital in the dessert, replete with sanitation, sterile operating theatres and the usual departments any small-town hospital in a war zone would normally have. This meant the Engineers were out by day making a hospital, coming back at after a full day needing their diggers and tractors fixing. Within a few days I was working nights and left to sleep by day so I could keep the vehicles going and ensure the war preparations didn't go too far astray.

In fairness, I was doing quite well in this role, but it wasn't helping my mood that my new wife didn't seem interested in answering the phone. Sometimes I'd later discover she had 'popped round' to see other wives of the lads who were away with me on nights I said I'd try calling. I grew to hate answerphones.

Nights in the Arabian deserts get cold and windy, which means a lot of dust gets blown about. I had nothing to protect me from breathing the dust in and I was started breathing difficulties. Eventually I went sick and got moved to the open bit of the hospital we were still building. I subsequently got diagnosed with pneumonia, and was side-lined to a contagion ward.

After a week of being in there, the officer who was supposed to be looking after our welfare while we were out there came to visit because he'd only found out that day that I was in hospital. Then those of us in the hospital got the message that the invasion was imminent and they were clearing the medical lines so they had free beds if things went bad. We would just be going to Cyprus to get better and sent back when our conditions improved. Two days later I landed in the UK, It was all a story to get rid of us.

I felt let down.

Three days after I got home the invasion began. It was supposed to be my war, my time, the great event in my life. I watched 24-hour news channels non-stop! I lived in front of the TV, craving any information.

Nobody came to visit from the army, and with everyone round me fussing, I felt so alone. They didn't get it, they'd not been out there, they didn't know. 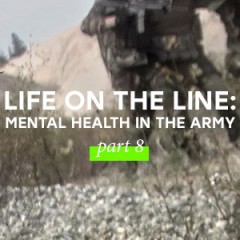 Life on the line: Mental health in the Army - Pt. 8