I had no specific training to go to Northern Ireland, and felt very wary of everyone around me on arrival. I was surrounded by people who, in my head after seeing so many news reports of soldiers getting killed growing up in Ireland, all could have been carrying guns and trying to find me as a British Soldier. I won't say I was scared, but I was acutely aware this was not an ideal position to be in.

Not sure what to do, but having collected my baggage, I slowly moved to a check in desk that wasn't busy, and asked where the people of the army go when they arrive. In my mind, I was secretly praying the lady wasn't going to point at me and call out 'He's one of them, he's a soldier!' Instead, she just nodded at the wall opposite and in a thick hard Belfast accent said quite plainly 'through that door'. I'd done it, found safety.

I sauntered in the general direction of the door while trying to not look too conspicuous. Looking round seeing the place to be fairly quiet I went through the door where I was promptly put in a minibus to the nearby RAF camp.

From there I was collected and loaded my stuff into an old Ford Escort. I then started my journey down to South Armagh. South Armagh is beautiful, full of lush green farmland, very reminiscent of many small rural towns of home, but with a few obvious differences. Those towns all had their kerbstones painted either Red, White and Blue for the unionist side or Green White and Red of the Republicans. Accompanying this, most homes had flags up on display to show their loyalty. It was obvious for anyone which kind of community was housed in any particular estate, village, town or city. The ever-popular murals the media loved to show were really just a thing of the larger population centres. In reality, the place was a patchwork of communities with a web of interlinking roads that kept both communities at a usually safe distance apart.

We arrived at Bessbrook Mill, the main base for the Army in Armagh which for a while held the record for being the world's busiest heliport. The base was exactly like it sounds - a Victorian mill the army had taken over, built a huge fence round and prepared it to defend itself just in case. It came complete with its own fleet of armoured Snatch Land Rovers and Saxon Armoured personnel carriers.

In many ways, it was a modern-day castle, from the days when castles were built defensively, rather than the later aesthetic reasons to build a castle. However, life inside was cramped, and in some ways comparable with life in a prison. Bessbrook offered support to the smaller stations at the infamous Crossmaglen, Forkhill and Newtonhamilton as well as the ever present Golf observation towers that dotted the vicinity of the border between the republic of Ireland and the North.

Outside of Londonderry and Belfast this was the most dangerous area for British troops in the whole of the province, and for good reason - it was known on both sides as Bandit Country. Somewhat worryingly I discovered in our operating area, L/Bdr Stephen Restorick was gunned down on the previous tour to ours, one month before the regiment I was with took over. It happened at a vehicle checkpoint just down the road from our mill using a Barret 50 high power sniper rifle. He was 23, and was the last man of the armed forces to be murdered by the provisional IRA. The weapon used to kill him was found while I was out there.

His murderer was later caught and sentenced a couple of years later. 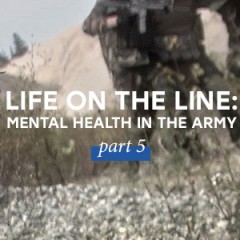 Life on the line: Mental health in the Army - Pt. 5