I didn't go back, and for 6-8 months went into a slump. I had finally hit the bottom. I found yet another crappy job packing milk in a dairy. The hours were long and the place had a smell of faintly rotting milk everywhere, and I was earning the stellar wage of £3.25 an hour. What was left after giving my parents their cut barely covered my food so I could eat for the week. If I was lucky enough to get overtime, the extra money was used to buy bus travel so I didn't have to walk the 45-minutes to work.

After yet another unpleasant day I realised I needed to go back to the Army, but this time I needed to address the things they wanted. I found a bar job in a hotel a lot closer that would feed me while at work, paid a whole 15p an hour extra and regularly offered overtime. With the extra money I was now earning, I invested in a pair of cheap yet comfortable trainers and started running. Fairly soon my weight started to reduce, and my fitness improved.

The gym in the hotel had a running club and were looking to put in a team to do a local half marathon. I put my name down, and started to do some more serious training, adjusting my diet to a healthier one. It's often stated that regular exercise can help improve mental health and I was starting to feel better about myself, I had a purpose - to get fit enough to join the army for my new start, and a reason to get up and go into work – to fund and partake in my new found interest in running. I was doing well, undertaking 9-15 mile runs with no problem, my timed runs were getting better.

When I decided to go back to the recruiting office and explained I'd already been tested, after a few minutes they found my file, and booked me another selection test at the now less exotic sounding Litchfield. This time I did well, as I'd been through this before knew what to do for each stage, and walked away with not just pass, but a letter to hand into my recruiting office and a confirmed date to start basic training. I went home feeling good about myself.

On my next free day, I was at the office as soon as it opened and duly handed in my letter. After filling in some paperwork and selecting a technical trade, I was asked to go to Manchester the next week to get officially signed up and into the army. Early April 1996 aged 21, I was attested (the name they use for signing your life away), at the recruiting office in Fountain Street, Manchester.

Unexpectedly I walked away with a certificate, a bible and the Queens Shilling – yes at the time it was still a thing all newly signed up people still get. In reality, the Queens Shilling was £5 in cash, which was promptly squandered on a few pints of cheap lager once I'd got back home. 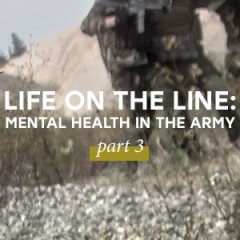 Life on the line: Mental health in the Army - Pt. 3