After writing up a news article, I got into contact with an army veteran who has suffered with mental health issues. He sent me a 17-page document that detailed his extensive career and prolonged issues with depression.

Having read through the link, I agree that the army needs better low-level training on more day to day mental health related issues. The previous issues the forces concentrated on during the times of the second Iraq and Afghanistan centred more on the kind of more worrying types of mental health issues like PTSD and trrauma. Now I'll never say they shouldn't be covered (I nursing a good friend through my final Afghan tour who was suffering and diagnosed out there), it's vital this is still covered appropriately. In fact the TRIM course developed to allow the military to cope is now taught equally to members of the emergency services and other people at increased risk like war correspondents charity workers in conflict zones and so forth. Where we fall down at times is in our dealing with people suffering the more everyday forms of mental ill health. mental health has only recently become a safe topic for the media in recent years.

Certainly, if anyone can change their culture regarding this issue it's the military. A good example of wholesale cultural change is the acceptance of LGBTQ people within our organisation. In the late 1990s when I joined it was not just frowned on, but could get you punished, and your reputation destroyed for being gay in the army. After the 2000 change in policy, the forces embraced this new part of our makeup, and are now listed by Stonewall as being one of the country's top 100 LGBTQ friendly employers for the past few years. I feel this shows that if a huge cultural change is embraced by the military then it can easily become a part of the whole. Therefore, addressing a smaller cultural change like accepting mental health issues should be relatively simple to address with appropriate education and understanding.

However, it needs to be considered that like most folk facing such issues in any walk of life, the problems I faced were unique to me in many ways. So, I would urge caution on drawing conclusions about the state of mental health care, based on just my account alone. To do so would be not only misreading the state of affairs for a multitude of soldier's situations; but also bringing into question a vast array of mental health professionals who in my experience are doing fantastic work in bringing back to full health men and women whose illnesses that can't be treated readily with a scalpel or other more physical treatment.

As for my story looking back there was possibly depression going on with me before I joined the army, but it's now over 20 years ago. I can't be sure as I wasn't diagnosed until more recent years. As I learned far too late, nobody knows they have a problem until it's explained to them, it all just seems like that's how life is so you accept it. I suppose the easiest way is to tell you my story, get it down in some form and let you sift through for what you need.

Everything I write is as I remember it and to the best of my knowledge how it happened – though time and my memory may have skewed things a bit. Unfortunately one of the things I still suffer with, even though I'm now coping with being me quite well these days is I have a memory that cannot always be the trusted. And I'd best apologise now if it's too long what I write, I'm very much at the beginning of this document and not sure where it will lead. 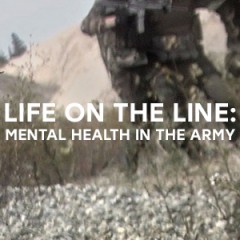 Life on the line: Mental health in the Army - Prologue

After writing up a news article, I got into contact with an army veteran who has suffered with mental health issues. He sent me a 17-page document that detailed his extensive career and prolonged issues with depression.