Mental health is a big taboo in this country, and indeed across the world. People are uncomfortable discussing issues that can have such a significant impact on their lives or the lives of their loved ones.

We at Voice have wanted to do something to tackle this stigma and get people talking about their mental health, which is why we launched Voice in your head and dedicated some editorial focus around mental health.

So far we have had some excellent content that really opens the doors for further discussion. As part of our partnership with YoungMinds for the month of October, we called out for creative responses to the theme of #helloyellow, and received an excellent poem from Brendan Lyons. We also received an incredibly candid response from one of our own staff members, who had never previously shared the extent of her own depression until she read the work we were doing and felt encouraged and inspired to open up.

We are far from the only people wanting to improve the dialogue surrounding mental health, however. We wrote a news piece last month about the joint effort of the Ministry of Defence and the Royal Foundation to improve mental health provisions to our armed forces. In the interest of thorough reporting I reached out to an ex-military personnel who had suffered from mental health issues while serving for comment.

I could not have anticipated what I received back.

Life on the line: Mental Health in the Army

In response to the questions I had sent over, this individual sent back a 17-page document that detailed his issues with mental health throughout his life, starting from a young age and extending throughout his extensive career in the military.

I got an immediate sense that this was as much for him as it was for us - a chance for this veteran to really reflect back on his life and career and finally get everything out.

Reading through it, I was shocked at some of the things I had read, and how problems and issues were missed, but also how readily accepted those feelings were by his peers and himself, as well as his process of acknowledgement and recovery.

With that in mind, I felt I would be doing a disservice to his life, his experiences, and his story if I tried to cut it down into a single comment or 500 word summary. That is why I am excited to announce that we will be serialising his story, and releasing segments of it out every day through November.

We will tweet out when a new section has been published over on our Twitter account, and you will be able to find every segment over in the Voice in your head Voicebox. You can also find all the parts here.

The story has gone through edits just to trim parts down and remove identifying details, but otherwise what you will read is exactly how the author wrote it.

I hope you enjoy it as much I do. 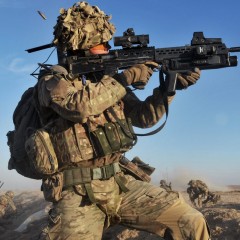 ​INTRODUCING... Life on the line: Mental health in the Army