Communication in the 21st Century has been built around the internet. It has been integral in giving a voice to the oppressed, harbouring communities for those who are otherwise excluded, and of course, provide almost instant breaking news to people. Never before has the world been so connected, with information at our fingertips and people free to air their opinions.

Unfortunately, fact and opinion are increasingly hard to distinguish, and the social media echo chambers we construct around ourselves permit our pre-cognitive biases to fool us into thinking what we read must be the truth.

The era of fake news?

We were very excited to this week deliver a workshop to over 20 people to demonstrate the power and importance of opinions, while also looking at how their misuse can warp the political agenda and democracy itself.

It's not all doom and gloom though, as we presented the case that fake news itself is not a new phenomenon. We argue that while the internet is indeed allowing opinions to spread further than ever before, and providing greater opportunities for nefarious individuals to try and undermine legitimate news reporting, the media itself has in-built biases, and the concept or non-partisan reporting is more idealistic than realistic.

In the jam-packed three hour workshop, we talked participants through the state of the media, before giving top tips on both review and opinion writing. All too often people say they don't have any strong opinions to talk about, so we proved that wasn't true with a session deliberately designed to get people talking.

Differing opinions are vital to society

Having given some best-practices advice on opinion writing, we set people the task of talking in small groups about issues that get them fired up, before writing a headline and first paragraph.

Walking round the room I heard discussions on how to utilise white privilege to provide better equality for everyone; the responsibility of technology in a digital world; and how you can't buy your way out of being female. To give context to that last point, the group were using examples such as Kate Winslet to argue that stating there is no pay gap is inherently flawed and that, especially with the current Harvey Weinstein controversy ongoing, having money still doesn't protect you from exploitation.

It was both invigorating and inspiring to hear strangers come together and talk about such pertinent issues, and the angles some were taking in response to an issue were completely new ways of thinking about things to me. This is exactly why the advocacy and promotion of good opinion writing is so important.

Getting people to talk to one another, especially when they have differing viewpoints, is a healthy and integral part of democracy and in developing as a human.

"Media has always got an agenda"

Rants N Bants is one such person who is most definitely not afraid to share his opinion. We were exceptionally pleased that he agreed to come and talk at the workshop about his explosive growth, which he attributed to his honesty and authenticity.

In a 20-minute down-to-earth talk, Rants described how his career started from simply messing around on Snapchat and getting a positive response. He posted a video online and with no official page or promotion achieved 60,000 views. Now, he says that anything under 1m views doesn't "turn me on anymore".

"Media has always got an agenda. Be aware of the orgs you work with & how they might want to treat you." @DSRantsNBants #youngopinionated
— Voice (@VoiceMagUK) October 24, 2017

From a single video to appearing on the BBC and working with VICE as a political correspondent, Rants has always stayed true to himself. He spoke about everyone in the media having an agenda, and how they may try to blindside you with questions or angles that will fit in with that. He spoke candidly about his resentment of such practices, and shared how Sky's exclusivity agreement with VICELAND is why he's yet to have his own programme on the station.

I keep referring back to this concept of genuine and authentic, but that's because it's something so integral to opinion writing. If you don't care about the topic, whatever you say will come across as insincere, and will only serve to damage your reputation or brand.

"Only talk abt what you care abt. Not just because it's topical. Keep your authenticity. Use your voice."@DSRantsNBants #youngopinionated pic.twitter.com/r0YU7djJI3
— Voice (@VoiceMagUK) October 24, 2017

The whole event was recorded by film producer and Voice contributor Idriss Assoumanou, and we will be releasing highlights over the next few weeks - so keep an eye out!

In the meantime, here is a condensed version of the State of the Media presentation shown during the workshop, complete with narrative notes and sources for those who want to do further research into the topic!

A big thank you to MozFest for offering us space at the RSA to host this event. This workshop was scheduled as part of MozFest House, a week-long festival that features films, workshops, conferences, and talks, all focusing on Internet health and showcasing the diversity of the Mozilla network. It is part of the wider Mozilla Festival.

Thank you also to guest speaker Rants N Bants for giving such a detailed and outspoken insight into his career and the media.

Finally, thanks to everyone who attended the event. We hope you found it useful and informative, and if you want to connect with us you can find us on all social media at @voicemaguk. Please do post your opinion pieces up on the website - the best ones will be included in the MozFest mail in November!

And above all else remember to use your Voice! 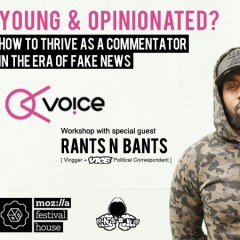 ​Young and opinionated? How to thrive as a commentator in an era of fake news