Each Fringe, we see well over 150 shows from across art forms and venues, free and paid-for. After each one, we pool our thoughts and award the best we saw. Congratulations to this year's thirteen winners.

Ellen: This play is so simple yet immensely moving. With only two people on stage and very limited speech the production is stark, yet cleverly staged. It aptly looks at how quickly our freedoms can be restricted and how important communication and our voices are on both a personal and public level. The cast should be applauded for the range of emotion they convey, which is a testament to masterful acting.

Sam: A brilliant show that was both one of the funniest and one of the most emotional pieces I saw. What starts as a great stand-up becomes a truly inspirational example of the positive impact we can have on the world, and left me in complete awe.

Sally: GG thinks she feels 'too much', can't understand what the ball of love or hate or whatever it is building in the pit of her stomach is there for and how to release it without exploding. Naomi Sheldon's one-woman comedic theatre piece did just that – it provoked a raw uncontrollable ball of emotion inside of me, and as an audience member it felt fantastic.

Ellen: Whatever you voted in the referendum, no-one can deny that Brexit has been a shambles. Thankfully, Brexit the Musical is here to provide some comic relief. It is brilliantly written, stomach-achingly funny, and gives as good to the hippie Corbyn as it does to bumbling Boris. This production lacks nothing, with an impressive set and costumes, catchy and hilarious songs, and plenty of political satire that will have you laughing all night.

Bhav: Mark Nelson's standard style of comedy sets him apart at the Fringe where embellishments are the way to get noticed. Look closely for the gems and you'll find pure comedy – standing on stage cracking wise and telling foul and fiendish stories. Nelson took Irreverence to new heights with Irreverence.

(Live Nation in association with MZA)

Tom: From the moment it started until the moment it finished (and for however long the naked man was suspended on stage afterwards) the audience were in rapturous laughter, even when deep down we knew we shouldn't be.

The gimps toe the line between barely acceptable and outright inappropriate. Banned sketch ideas included the Madeleine Mc-CanCan and Painting with Adolf, just to give you an idea of what you'll be dealing with.

Sam: Without doubt the most fun show I saw. The incredible energy, brilliant dancing and breathtaking vocals create a real showstopper, and the genuine heart and love filling the piece add a wonderfully personal touch. I loved it so much I went a second time, and enjoyed it even more!

Sally: Speaking about her issues with mental health and the make or break moments that have changed her life, Burton seems like the type of person everybody would want in their life. This was carried through the show and I feel privileged to have experienced it. She successfully translated very serious issues that are often hushed in society anecdotally, let alone personally, in a fashion that stimulated and engaged each different audience member – a feat in itself, particularly considering the sensitive subject matter.

Emrys: Anya is an all round great performer. I don't think the show would be to everyone's taste, but if you can appreciate a decent combination of performance art, if you can accept a play on gender differences, and if you want a highly enjoyable hour then this will be for you.

Bhav: Such wild and passionate laughter I have never been part of as that which came from the audience at Some People. So many consecutive, brilliant, erudite jokes that were told so masterfully by a comedian who admits to needing to find his feet again – literally and in terms of comedy. A precious routine that I didn't want to end.

Mark Forward Wins All the Awards

Tom: Bombastic? Unhinged? Unstructured? F-ing insane? Any and all of these would be totally appropriate to describe Mark Forward's show, as long as they were accompanied with 'so funny you come out feeling physically assaulted'. He joked about not having a long of time to write the show, and it's hard to know whether or not he was serious. Whether it was meticulously planned lunacy, or truly off-the-cuff unplanned hilarity, Mark Forward exhibited phenomenal skill in the art of comedy, and you absolutely have to see him.

(Gag Reflex in association with TGA)

Elena: Origins has been one of the wonderful surprises at the Fringe this year. Telling the story of Cain and Abel, the two performers explore this ancient tale and recreating atmospheres and emotions almost purely through gestures. While rhythmical tones mix with beautiful choreographies in a fast-paced sequence, a wide range of lights are employed to underline every single slow movement or change of expression. Origins is a beautiful performance and it traps you in its haunted world, before letting you go at the end. If you are looking for something powerful and intimate at the same time, you know where to go.

Good luck to all the winners for the future! 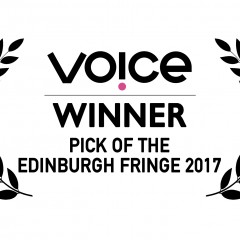 Voice's Pick of the Edinburgh Fringe 2017

Each Fringe, we see well over 150 shows from across art forms and venues, free and paid-for. After each one, we pool our thoughts and award the best we saw. Congratulations to this year's thirteen winners.