The Electronic Entertainment Expo returned again, with all the major companies touting their latest wares

E3, the biggest gaming convention of the year, concluded this week, and the biggest players and publishers all took to the stage to detail what gamers can expect over the next couple of years.

2017 provided slightly different from normal in that quite a few companies seemed to depart from their tried and tested formula for presentation, some successfully, some a little bit weird.

A few years back EA took a step back from the main E3 conference and set up their own EA PLAY event, which aims to bring players "closer to the games they love". The aim is to allow attendees to go and play the games they see on stage straight afterwards, which is nice sentiment. They showed off some interesting new games, including Battlefront II, but the presentation was exceptionally awkward in places as in an effort to appeal to wider gaming communities and casual players, they brought in YouTubers and streamers who, while good at what they do, aren't professional presenters.

Microsoft and their Xbox division have been on the back foot the whole of this generation, but that has almost been a blessing as they have shown the most promise and innovation subsequently. Their announcement of Project Scorpio last year has this year been names Xbox One X, and Microsoft claim (statistically accurately) that it is "the world's most powerful console". Outside of the console announcement, they had a 42 game strong roster of announcements, although the messaging around exclusives could have been clearer, and there is still a dearth of first-party games.

Bethesda are newbies to the E3 scene comparatively, having only been to the conference since 2015. However, with an exceptionally strong roster of games both under their own studio and the studios they publish for, Bethesda have done very well for themselves. This year proved to be no different, and despite a slightly odd presentation style, they managed to hit many home runs with their announcements. Best of all, everything they showed off is available to buy this year - instead of 2018 or later like some...

Ubisoft, the home of the strange E3 conferences. Who can forget Mr Caffeine, that awkward Assassin's Creed meme attempt, those men in leopard print tracksuits, the dancing animals, or Battle Tag? With all of that considered, Ubisoft had an exceptionally good E3 this year, with none of the horrendous awkwardness that makes you want to gauge out your own eyes, just a solid roster of impressive looking games. You get a thumbs up Ubisoft, followed swiftly by the middle finger for your disgusting pricing and release strategies for things like Assassin's Creed Origins. £700 and you STILL don't get everything?!

This leaders of this generation of console took a very subdued approach this year, opting to instead just run back-to-back trailers rather than bring developers and executives on stage. Even CEO Shawn Layden made but a few brief appearances to open and close the event. They had great games on show, but it did sort of feel like E3 2016 trimmed down and replayed. Either way, a strong performance. 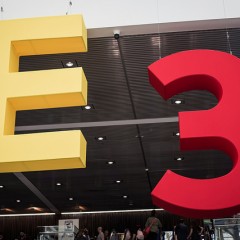 The Electronic Entertainment Expo returned again, with all the major companies touting their latest wares