Not your typical Ubisoft, and that's not a bad thing

I think it's fair to say that Ubisoft are known for their crazy whacky press conferences, filled with dancing giraffes, men in zebra tracksuits, Aisha Tyler, and Mr Caffeine.

This year it was a surprisingly tame affair. Fewer bad puns, no weird men in tracksuits, and no giraffes. There was however one pada dancing, but for Ubisoft that's positively understated.

Here are the main announcements.

Nintendo have finally let Mario grow up a bit, and move out of the Nintendo exclusive clubhouse and make an appearance in other franchises. I say growing up, Mario's first cross-franchise excursion is with Rabbids from Ubisoft's Rayman.

Nintendo's Shigeru Miyamoto appeared on the stage rocking some props from the game, which is a turn-based RPG, very similar to that of XCOM.

This crazy looking game will be out on 9 August

Ubisoft took two years out to work on their latest Assassin's Creed franchise and are now ready to unveil the cover. Origins is set in ancient Egypt, and acting as a prequel to the rest of the franchise, it once again details the struggle of Assassins v Templars and the balance of ideologies and power. You play as Bayek, and are free to roam around Egypt completing objectives in any order. In a shift from previous games, there won't be as many tall buildings you can scale to unlock all waypoints on a map, forcing more exploration. In addition to new combat, boss battles, and mythical creatures, it does appear to be a sharp departure from prior AC games.

But, Ubisoft just can't help themselves, and are offering an $800 Collector's Edition. Why, Ubi, why?

There wasn't really a lot given away about Transference, but people may be interested to know that it is being produced by Spectrevision - Elijah Wood's development company. It is VR game that is available on all major VR headsets, and invited players to "enter the home of the mind." It's described as a psychological thriller and is apparently meant to look into PTSD and brain activity research from the 1990's.

Those of you who played Assassin's Creed: Black Flag, you will almost certainly hold fond memories of the sailing aspects of the game, if not everything else. Well, Ubisoft heard saw your enthusiasm and ripped the sailing out of Black Flags and are now presenting it as a standalone game called Skull and Bones. The tactical multiplayer game sees players stand as captain of their own pirate ship, and have the option of going alone or partnering up with up to four other players to fight five-v-five battles. There are multiple ship types that allow for different play-styles, and there are 'seasons', meaning you have the opportunity to climb ranks on the leaderboard.

With Skylanders and Disney Infinity both being shelved, you would be forgiven for thinking that the toys-to-life genre is over. But Ubisoft apparently didn't get the memo, and Battle for Atlas will see you purchasing real life ship models, guns and upgrades to then use in-game. Perhaps they wanted to get in on the action when it was fresh but it got stuck in development? Perhaps, but why then are they announcing this troupe-fuelled game in late 2018?!

The trailer itself didn't really give anything away, and left many questions unanswered. Primarily for me, why does this game instantly remind me of No Man's Sky and why would you want to remind gamers of that!?

Given the (absolutely ludicrous) petition floating around on Change.org, one might have thought that Ubisoft would have taken some stage time to address the petty concerns of gamers who hate seeing white antagonists.

Instead, Far Cry did what Far Cry does, and showed a protagonist taking on fanatical crazies with violence and gusto. Modern day Montana is the setting for the game, and you are tasked with taking down the cult leader. There are NPC team mates you can recruit to supplement your play style, and, most importantly, there are dogs!

Beyond Good and Evil 2

I never played the original Beyond Good and Evil, but even I was hyped to see its sequel on screen. The original came out in 2003 and fans have been mostly kept in the dark about any prospect of a sequel, despite it originally being planned as a trilogy.

We were shown a (ridiculously gorgeous) CGI trailer for the game as its official announcement, and it was later clarified that the sequel is actually going to be a prequel. The trailer was set in System 3, an interstellar hub that humanity has moved to. Just, seriously, watch the trailer. It's beautiful. Shame it's not in-engine though, so probably wise to taper expectations for the finished product... 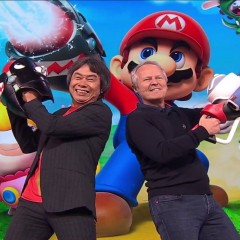 Not your typical Ubisoft, and that's not a bad thing