It's the company's third year at E3, and they have certainly got into the swing of things

Bethesda have only been coming to E3 for three years, but already they appear to have mastered the art of delivering what fans want.

Despite Todd Howard not being present for the last two conferences, Pete Hines has done an excellent job guiding viewers through the wide array of games Bethesda have created.

What was most impressive about this conference was the fact that every single game they announced was coming out this year!

Two VR games instead of one

Last year we got a look at Fallout 4 VR, and Bethesda kicked off the conference this year by returning us to that experience, and showing off their second VR game, Doom VFR. The former is the full Fallout 4 game in virtual reality, meaning you can take on deathclaws, build your own house and help yet another bloody settlement.

Meanwhile, Doom VFR will have you teleporting around caves and space stations destroying hellspawn in typical Doom fashion. Gameplay looked exceptionally fast-paced, which will be interesting given VR's propensity for motion sickness.

We return to BJ Blazkowics in a new Wolfenstein game that is set in 1961. In an extended trailer we saw BJ take on Nazi's with the help of resistance fighters in a conquered and occupied America. It looked to have more of everything that people loved from the last Wolfenstein game, which can only be a recipe for printing money!

The Evil Within 2 coming 13 October

The sequel to the 2014 psychological survival horror game is very fittingly coming out Friday the 13th, and it certainly has the horror factor narrowed down. In an extended trailer for The Evil Within 2 we are once again placed in the shoes of Sebastian Castellanos - with a lot more self-doubt and introspective reflection. It also had the classic angry hooded mob with pitchforks and fire, and a exceptionally unsettling vibe.

Morrowind is being added to Elder Scrolls Online

Those who are heavily invested in the world of Elder Scrolls Online will probably be excited to hear that Morrowind is being added to the game as an expansion. This will be the first additional 'chapter' to the MMO, costing £29.99 to upgrade or £39.99 with the base game. This coupled with the One Tamriel upgrade of last year means new entrants to ESO have an ever-growing world to jump into.

Not a lot was mentioned about the new stand-alone content, but fans of the series will be familiar with the characters and setting. In the trailer, Billie Lurk rescues former master and murderer Daud, and that sets them on a mission to kill The Outsider; a supernatural force that has granted powers to multiple protagonists. Death of the Outsider is a sequel to Dishonoured 2 and the episodic DLC from the original Dishonored.

Cast your mind back to 2015 and, among all the other controversies that were kicking off, Bethesda annoyed their community by teaming up with Steam to start offering paid-for mods, something that spits in the face of the community. After significant backlash, they dropped the idea, but now seem to have partially brought the idea back under a new name and a new sales pitch. The Creators Club is a way for external developers (read: modders) to work WITH Bethesda to create additional content for the game, that can then be purchased with credits, that are transferable between Fallout 4 and Skyrim: Special Edition. If you think about this as third-party DLC rather than paid-for mods, it becomes more palatable. While the option for modders to be paid for their work is welcome, I can see the community still being up in arms about this.

What do you think about the Creators Club? Let me know in the comments! 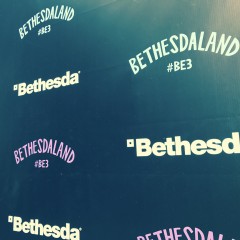 It's the company's third year at E3, and they have certainly got into the swing of things