A different approach from usual, but still full of games

Sony adopted different style to their E3 conference this year, opting to have wall-to-wall videos and trailers rather than the usual interspersed talks from developers and Sony executives. Speaking of executives, even Sony Interactive's CEO Shawn Layden appeared a few times, mostly to open and close the event.

It was an interesting approach, and meant to whole press conference, if it can still be called that, came in at just an hour long.

Here are some of the big things that came from that hour.

Naughty Dog has pulled the cover off another Uncharted game, and for the first time it doesn't have Nathan Drake as the main protagonist. The Lost Legacy will instead see Chloe Frazer and Nadine Ross have to work to put their differences aside to survive in India and find the artifact they're after.

For those who cannot wait for Anthem, Destiny 2 might be able to fill your space shooter needs, and it is coming two days early! Because of the deal Sony have struck with Bungie and/or publisher Activision, PS4 players will be receiving the Lake of Shadows Strike, a Crucible map called Retribution, armour, a ship, and an exotic sniper rifle called Borealis. All the Playstation exclusive content will eventually arrive on XBox and PC in 2018 - although no specific date was offered.

One of the best games released last year is getting its first DLC, and it's looking cooool. Returning as protagonist Aloy, players are off on another story-based adventure in a new snowy region with new weapons and more deadly robots and different armour types. No release date or price was given though.

Shadow of the Colossus remastered - again

Much-loved Shadow of the Colossus was first released in 2005/6 (region dependent) and was a critical success. It then got a remaster in 2011 to provide HD graphics, Playstation Trophies and 3D support for the PS3. Now, it is being remade again, by the same company who oversaw the first remaster, Bluepoint. It's said that all the game assets are being rebuild from the ground up, with everything remaining the same other than the option of a new control system.

We saw more footage of the upcoming Marvel Vs Capcom: Infinite game, and it looks like there will be many uneasy alliances created to stop the threat of Ultron-Sigma. The footage, as reported by Polygon, had Gamora from Guardians of the Galaxy, Nova, Doctor Strange, Thanos, Zero from the Mega Man X games, Dante from the Devil May Cry, Arthur, Spencer from Bionic Commando and Black Panther featured at various points.

It looks beautiful. I know I should and probably could offer more than that, but it's really all you can say about the new GoW game. Kratos is back, this time with a son and seems to have less understanding of the world around him - a result of him existing in the world of Norse mythology instead of the Greek mythos of prior games. Fun fact - Kratos' beard is rendered in real time!

Why it's called God of War despite being the eighth game in the series though, I don't know.

David Cage is back with another narrative-driven project. This time is poses questions around humanity and modern day slavery, with the use of cybernetically enhanced humans called androids. The game has multiple branches scenarios, that can change and alter depending on decisions the player makes throughout gameplay. There will be multiple playable characters who can die, and the game just carries on without them.

No release date was offered though.

Sony finished off their conference with a better look at Insomniac Games' new Spider-Man game. The gameplay we watched saw the webslinger engaging multiple enemies with his acrobatic fighting style that was very akin to the Arkham series, with additional environmental takedowns possible. We also got a look at Spidey web-slinging around the city, running on walls and up buildings, all which looked reasonably impressive. However, I do have a slight concern that the game looked a little bit QTE heavy with lots of scripted scenes. 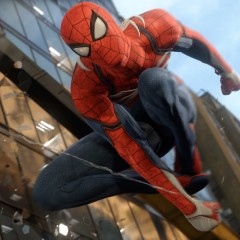 A different approach from usual, but still full of games