The world's most powerful console… and people still aren't happy

Xbox has been on the back foot this whole generation, with their initial Xbox One launch being a confused mess, and the console costing $100 more than the PS4. It's inclusion of the Kinect didn't please many, using up power that could have been dedicated to games, and their U-turning on always on connectivity. From start to finish, it was a disaster.

In subsequent years this underdog mentality has forced Microsoft to really up its game and sort its hardware and software out. Some of the fruits of this labour were shown during E3 this year, although some of the messaging remains confusing.

Kicking off the Microsoft conference was the launch announcement for their latest console, the Xbox One X. After being teased last year under the project name Scorpio, the console is the most powerful ever shipped to market. Touting 6 teraflops of GPU, a custom AMD processor, 12GB of GDDR5 RAM and insanely fast memory bandwidth, the Xbox One X blows everything else out of the water in terms of true power. It is able to deliver true 4K graphics, Spatial audio, HDR and even 4K DVR, so you can record all your gaming clips in their true resolution.

After being teased at E3 yesterday, Microsoft finished their conference with gameplay from BioWare's next game, Anthem. In it, you play as a Freelancer, who explore new landscapes in their mechanised suits known as Javelins. These exo-suits are highly customisable, allowing for multiple playstyles. It is categorised as an action-RPG, and is both single and multiplayer. The game is a "live service" similar to Destiny, and indeed there were numerous comparisons that could be made to the Bungie game. It is due out in Fall 2018.

Forza, one of the first-party games from Microsoft, was announced with a native 4K resolution and locked in 60fps. But what was more interesting was that Forza is so popular in the world of gaming and car enthusiasts that Porsche actually decided to reveal their new supercar to the world - the Porsche 911 GT2 RS.

PUBG coming to Xbox One

The much-loved game of the streaming community will be coming to Xbox as a console exclusive. The battle royale game puts anywhere up to 100 players against each other in a Hunger Games style fight to the death. Coming to Xbox One "later this year", the game will have Xbox One X specific enhancements, although it's not specified exactly what those are.

Cuphead finally gets a release date

The long awaited 1930's styled run-and-gun Cuphead got a release date, after being seven-years in the making and first being shown in 2014. The hand-drawn love letter to the old-style cartoons will be released on Windows and Xbox One in September of this year.

Anyone who knows Minecraft will be aware that the smash-hit sandbox game got by with its blocky 16-bit graphics. However, Microsoft showed off the capabilities of One X's 4K capabilities using the low fidelity game and the results were absolutely stunning. With updated water textures, lighting and shaders, you would be forgiven for not even recognising the Mojang game. Even more exciting though is that the Better Together update will unify the Nintendo Switch and Xbox One versions with the mobile, PC and VR versions so they all run on the Bedrock Engine. This means they will all get the same updates and DLC, but more interestingly, players can log into the same servers and play together, regardless of platform. Unless you own a PS4, because Sony.

It was at E3 two years ago that Phil Spencer stood on stage and said that the team had managed to work out how to provide backwards compatibility. This year they provided another heavily requested feature in backwards compatibility for the original Xbox, starting with Crimson Skies. Spencer also asserted that OG Xbox games will look and run better on the newer consoles. In further interviews though, Spencer did admit that the library of games will be smaller than the 360, due to licensing issues. 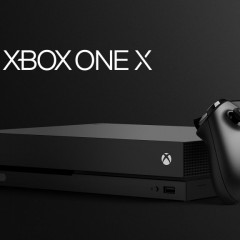 The world's most powerful console… and people still aren't happy