Mumblecrust Theatre take home the award for their charming puppet based performance.

We are pleased to announce that the winner of our inaugoral Best Newcomer to Brighton Fringe 2017 award goes to Mumblecrust Theatre for Tale of the Cockatrice.

Faced with intense competition from an exceptionally strong list of nominees, Mumblecrust Theatre stood out with their polish and charm.

The minimalist set was used exceedingly well, successfully drawing attention to the few props that were used, and the adorable puppets. Everything about the performance screamed crativity, from the songs and script, to the hessian sack that so superbly came to represent a horse.

Children and adults alike were sat engrossed with the story that was unfurling in front of them. Creating just the right mix of humour, suspense and fear, the befuddled storytellling duo managed to capture the imagination of everyone in the audience, and truly demonstrated why they were worthy winners of Best Newcomer.

"We are so happy and surprised. The audiences at Brighton Fringe have been really lovely but we've now been recognised by the industry as well, which just feels crazy. We are absolutely in shock.

"We only managed to do this show by running a Kickstarter fundraising campaign, and the budget was tiny, but we threw our all into it. We're planning on doing Edinburgh so we're hoping the recognition here will really open doors for us."

The full list of nominations for the award were as follows: 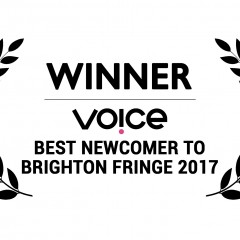 Mumblecrust Theatre take home the award for their charming puppet based performance.