Wales has had a devolved government since 1999 but many have questioned whether the country has been given enough devolved powers - or even if devolution itself is enough to represent the people of Wales.

In 1997 a newly elected Labour UK government held a referendum on Welsh devolution, and 50.3% voted for a devolved Welsh government. In 1998 the Government of Wales Act was passed and in 1999 the National Assembly for Wales met for the first time.

The journey to this point had been long, complex, and fraught with disagreements, but devolution was not necessarily a neat end to things. Rather, it marked the beginning of a change in Welsh politics and Welsh national identity.

The 1998 Government of Wales Act had included several core values such as a commitment to equality, sustainable development, working in partnership, and equal treatment of both the Welsh and English languages. When the Assembly met for the first time, 24 out of the 60 newly elected members were women – which was a marked improvement from the previously majority male demographic in Welsh politics.

In 2007, following the third Welsh general election, the National Assembly was formally separated from the Welsh government due to the updated 2006 Government of Wales Act. The act gave the Assembly powers to make primary legislation for the first time.

Under the act, the National Assembly is a democratically elected body that represents the interests of Wales, and the Welsh people and makes laws for Wales and holds the Welsh Government to account. The Welsh Government is a devolved government for Wales and is formed after an election. It is composed of representatives from either a single party, or a coalition of the political parties in the Assembly.

The separation between the two was intended to further establish the roles of the Assembly and Government, setting Welsh ministers as decision-makers with the ability to develop and implement policy, and Assembly members to scrutinise and approve their actions.

In 2011 a further devolution referendum voted in favour of giving more primary legislation powers to the National Assembly in the areas that it had control over. There were 20 areas that the assembly had control over including housing, environment, the Welsh language, culture, economic development, and education.

These powers were further expanded with the Wales Act 2014, which granted the Assembly several new financial powers, including those concerning taxation and borrowing. The Wales Act 2017 again enhanced the National Assembly, making it a permanent part of the UK constitution and giving it the power to decide its own name and voting system. This also protected the Assembly and Welsh Government from being abolished by Westminster, as it could now only be done if the people of Wales voted for it in a referendum.

The Welsh population are able to vote in four different elections. The first is the UK general elections, where MPs are voted into the House of Commons in Westminster. The other three elections are exclusive to Welsh citizens: elections to the Senedd or Welsh Assembly, local elections for representatives for the 22 principal areas of Wales, and elections for the Police and Crime Commissioner.

Elections to the Senedd work differently to UK general elections in that voters are asked to cast two votes. One vote is for a representative for your constituency, which uses a first-past-the-post system, and the other vote is for your regional representative, which is decided using the additional member system. Wales is divided into 5 regions: South Wales East, South Wales Central, South Wales West, Mid and West Wales, and North Wales.

Four members are selected from each of the 5 regions using the additional member system, meaning that 20 extra members of the Senedd are elected alongside the 40 members elected in the first-past-the-post system – one for each of Wales’ 40 constituencies.

This two-part voting system is intended to make sure that the Senedd best represents voters’ interests. Some people might feel the need to vote tactically in the constituency vote, with first-past-the-post systems often meaning that as few as two or three parties are realistically in line to win. However, with the additional member system, voters are able to also vote for a party that they may not have felt able to support in a first-past-the-post situation, presenting a more democratic alternative that more fairly reflects the wants of the public.

In 2020, after 21 years, the Assembly was finally recognised as an established parliament due to the passing of the Senedd and Elections (Wales) Act 2020. This allowed it to change its name to Senedd Cymru or Welsh Parliament and gave 16- and 17-year-olds and foreign nationals the right to vote in Senedd elections.

From devolution to independence?

However, some say devolution is not enough. Wales still has the most restricted devolved powers in the UK, and unlike Scotland and Northern Ireland does not have a separate justice policy. Wales is part of a single jurisdiction with England, which was found to be “failing the people of Wales” by an independent commission, Justice in Wales for the People of Wales. It also bears mentioning that in the 22 years since the Senedd’s creation, Wales has consistently voted Labour into power year after year in Senedd elections, yet the country is still in many ways governed by the UK’s Conservative government – a party that the people of Wales have demonstrated does not and has not ever represented them.

It has also been announced that Welsh Labour and Plaid Cymru (Wales’s nationalist party, like the SNP to Scotland) have agreed on a co-operation deal which will likely take Wales in a more left-leaning direction. The agreement includes commitments to ensuring free school meals for all primary school students, bringing Wales’s net zero target from 2050 to 2035, a cap on second and holiday home numbers, rent control proposals to make housing more affordable, a National Care Service, and reforms of housing law to tackle homelessness.

With Wales moving towards the left as Westminster continues its lurch to the right, it’s worth considering what relevance the UK government has to the people of Wales, and also whether it in any way meaningfully represents them. 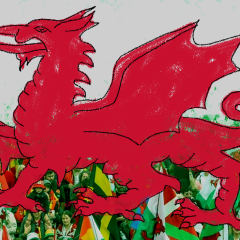 Wales has had a devolved government since 1999 but many have questioned whether the country has been given enough devolved powers - or even if devolution itself is enough to represent the people of Wales.