‘His performances rumble with rage, passion and humour, peppered with brilliantly smart observations.’

Luke Wright, winner of Best Spoken Word Performer at May’s 2021 Saboteur Awards, has based his 11th full length poetry show, The Ballad Seller, on these bawdy street ballads. As part of an extensive UK tour the show comes to Manchester’s The Edge, Theatre & Arts Centre for two dates on Thursday 14 and Friday 15 October.

The Ballad Seller is also a limited edition book which features illustrations by The Guardian’s chief political cartoonist Martin Rowson.

‘One of the greats. A poetic pugilist’ Carl Barât (The Libertines)

He regularly tours with John Cooper Clarke and The Libertines and was recently dubbed ‘the bard of lockdown’ by The Daily Telegraph after his marathon stint of 100 consecutive nights of online shows. 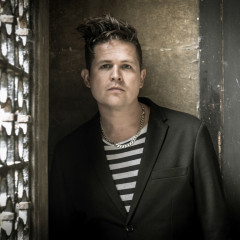