Join us this Friday @ 1 pm live on IG with actor and artistic director of 'DK Delight Productions' about his upcoming online Christmas show.

As part of our instaviews series, this Friday we will be interviewing actor and artistic director of DK Delight Productions Derek Murphy, about his upcoming online Christmas show, The Delight Before Christmas 2. You can buy your tickets for the show this weekend here.

On-Screen, he stars in the film 'Sequins' (Organised Chaos) alongside James Dreyfus. Can be heard in ‘Listening Books’ Radio play ‘My Boy Jack’ and Audiobook 'The Gnarl'(Audible). He appears in advertising campaigns for 'Jaguar' and 'Cadburys'. Screen credits include films ‘The Date’ (Organised Chaos), ‘Criminal’ (Foliage Films) and ‘Situations Vacant’ (Grand Pictures/Park Films) and on Television ‘We watch, You Watch’(RTE) and ‘Killinaskully’(RTE) and the web Series ‘Negotiations’ (Able Archer).

He is also the Artistic Director of 'DK Delight Productions'

He can next be seen in 'Farewell George Bernard Shaw' in Dec.

DK Delight Productions have produced two very successful 'DelightNight' New Writing nights in 2019, along with the Christmas Storytelling spectacular 'The Delight Before Christmas' in Dec 2019, 'A Frightful Delight' in Oct 2020 and a staged rehearsed reading of 'Chelsea Perkins' a New full length Play from American writer Aren Haun in Jan 2020. Aswell as a new Webseries 'Parklife' being released soon.

They have also produced several music videos for London Drag Star 'Orla Nothin'. Which can be seen on Orlas YouTube channel. 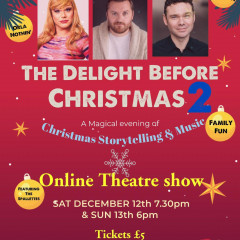 Join us this Friday @ 1 pm live on IG with actor and artistic director of 'DK Delight Productions' about his upcoming online Christmas show.