Gilded Balloon are bringing us a socially-distanced 2020 fringe

Karen and Katy Koren from Gilded Balloon have curated a Fringe-worthy programme of top quality events and shows to help audiences everywhere to scratch their Fringe itch this August. This innovative programme will not only keep Fringe regulars happy but will also give Fringe newcomers a perfect introduction to the fun, creativity and pure joy of an August spent with the Gilded Balloon.

Gilded Balloon have compiled some of the most iconic performances from the biggest names to ever grace the Late’n’Live stage for the best line up that never was! Side-splitting sets from comedy legends such as Dara O’Briain, Daniel Kitson, Jimmy Carr, Katherine Ryan, Flight of the Concords, Tom Allen, Dane Baptiste, Aisling Bea, Adam Hills and many more. In true Late’n’Live fashion, anything goes… Bad language and outrageous behaviour guaranteed.

Live on the Gilded Balloon YouTube channel at 9pm on Saturdays throughout August. Subscribe to tune in when they are released.

Best Bits of So You Think You're Funny?

This fascinating series will feature highlights from the UK’s longest-running comedy newcomer competition where some of the all-time greats were launched. Confirmed acts taking part include Hannah Gadsby, Aisling Bea, Sarah Millican, Sean Walsh, Maisie Adam alongside many more.

Live on Gilded Balloon YouTube channel at 8pm on Thursdays throughout August.

Written and recorded during Lockdown, The Coronalogues is an audio series written by Keir McAllister featuring five stories from one street in Edinburgh. The all Scottish cast includes JoJo Sutherland, Paul Sneddon, Megan Shandley, Cal MacAninch, Rosco McClelland and Shauna MacDonald with Original Music composed and performed by Dave Be Mac.

A new platform that will be packed with some of the incredible comedy and theatre shows that have appeared at Gilded Balloon over the past 35 years. For the first time ever, the venues are giving exclusive online access to some hand-picked favourites including sell-out smash hits Double Feature with Andy Gray and Grant Stott, Lewis MacLeod and Ronni Ancona’s Just Checking In and Gilded Balloon’s 30th Anniversary extravaganza, recorded at the Playhouse Theatre in Edinburgh and featuring some of the biggest names in comedy. Gilded Balloon Offstage will also be updated regularly with new shows after August.

Gilded Balloon have teamed up with Padlox Escape Rooms to present a brand-new interactive experience like no other. Play alone or grab some pals for a socially distanced treasure hunt featuring a Fringe themed trail of puzzles, games and clues to solve around the City of Edinburgh and visiting some iconic Fringe landmarks along the way. They’ve even enlisted a few famous Fringe faces to help participants out, too. Can you rescue the spirit of the fringe?

Live from Wednesday 5th August. Tickets cost £10 for a team of up to 4 people. Play any time throughout the month of August.

To celebrate all the wonderful artists who Gilded Balloon have worked with over the years they’ve asked them to send in specially created short shows for our audiences to enjoy throughout the month. Artists involved include Jarlath Regan, The Kinsey Sicks, Lost Voice Guy, Sam Shaber and Henry Naylor with more still to be confirmed!

Free to watch on the Gilded Balloon YouTube channel throughout August.

Zoomed out? Gilded Balloon have got just the treat to zoom you right back in. Join Fred on Zoom (surprise!), for a weekly show with guests such as Rory Bremner, Jo Brand, Greg Hemphill, Julie Nimmo Wilson and other old friends.

With their podcast now in its 3rd series, join Karen, Katy and some amazing female guests on Instagram Live for a drink and a natter in their virtual Loft Bar. Previous guests include Elaine C Smith, Jayde Adams, Rosie Jones and Jo Brand, with Jo’s episode to be released this August!

Live on Gilded Balloon’s Instagram every Wednesday from 8pm.

So You Think You're Funny? Locked Down

Although this year’s So You Think You’re Funny? competition has had to be postponed, Gilded Balloon will continue to support the newcomers to the Comedy industry who are unable to gig and hone their craft at this time. The aim is to provide this year’s applicants the possibility to be mentored by industry experts.  Whilst this won’t replace the huge learning experience of performing in front of a live audience, it is hoped that it will still offer these new performers a valuable opportunity to perfect their material and performance style.

Clips will be sent to industry throughout August with feedback sent back to applicants by the end of September. These clips will be private and only seen by our industry panel.

The majority of the events and shows in this year’s Gilded Balloon Fringe programme will be totally free to watch. However, audiences will still have an opportunity to donate money through the site if they wish to. Part of any money raised will be used by Gilded Balloon to support their current programme and also to ensure they can continue to support artists at the Fringe in 2021. The remainder will be split between Gilded Balloon key freelance workers who have struggled to survive the lockdown, and our charity partner, Intercultural Youth Scotland.

Donations can be made here:

All content will only be available for August so make sure to tune in. The show must go on (although socially distanced, slightly smaller and more digital than usual)! 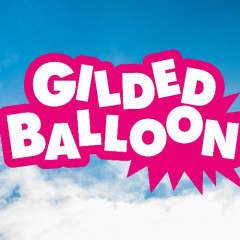 Gilded Balloon are bringing us a socially-distanced 2020 fringe