In aid of charity, ten comedians from across the world will take part in a free live stream comedy showcase on Thursday 14th May at 8pm via the Komedia Live YouTube channel.

If you were attending a comedy gig which has been cancelled, then do tune into enjoy this hour-long comedy entertainment in aid of Médecins Sans Frontières.

Presented live by Schalk Bezuidenhout, Comedy Without Borders will feature 10 first-class comedians, providing amusement from a wide range of perspectives across the globe, streaming in from India, Iceland, Australia, Italy, South Africa, America & Russia. Offering fresh, hilarious takes on the world as it turns upside down, tune in live to see a fantastic cast of comedians from the comfort of your sofa.

Dropping in as a special guest will be a champion of international comedy who has performed in 45
countries to date – actor-comedian Eddie Izzard. Taken from Eddie’s live theatre show Expectations of Great Expectations, Eddie will perform an extract from Charles Dickens’ classic novel Great Expectations.

All money donated will go on to support MSF and their fantastic teams around the globe. You can find out more about giving to this charity right here. 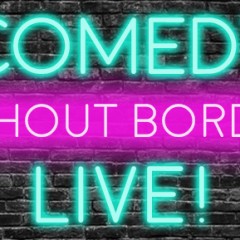