Over 80 artists respond to the planetary emergency with Extinction Underground: A late night take-over of VAULT Festival.

Over 80 artists respond to the planetary emergency with Extinction Underground: A late night take-over of VAULT Festival

Extinction Underground is an interactive and immersive late night playground beneath the streets of London in response to the climate and ecological emergency. An array of artists, performers, radicals and headlining music acts will come together with vital acts of co-creation, artistic expression, connection to the planet and one another.
Audience members and late-night revellers will be taken on a journey where rebellion, protest and the arts meet: an interactive, disruptive and moving spectacular of grief-stricken expressions and world-building visions of the future - with circus, drag, DJs, flash-mobs, processions, art-making stations, karaoke and even the opportunity to admit your carbon confessions to a priest.

PROGRAMME HIGHLIGHTS
Initially met by Fizz Margereson’s soundscapes of different natural environments, THE CAVERN is the first space an audience will encounter. Programmed as an intimate, sensory and alternative area, we open with aerial artist Sophie Page-Hall, followed by a poetry slam with beat-boxing sonic scientist Marv Radio and BBC proms runner-up Natalie Linh Bolderston. A ‘bed-in for climate justice’ with characters from playwright Stephanie Martin’s Rage, but Hope will be disrupted by Katy Dye’s Grief Karaoke before we end on a high with ecstatic dance meditation by GABA - think lyrical TED talk spliced with a rave, scored by the London Philharmonic.
THE UNDERBAR is host to many pop up performances including circus company The Feathers of Daedalus, all female dancing girl band The Yonis and ‘queer lover boy poet’ Tanaka Fuego with their experimental alternative R’n’b and grunge playground. Drag Kings C.E.O Peter Stokes AKA The King of Climate Breakdown and climate comedy duo Alan and Ron lead us to headlining DJs Edwin Congreave of Foals and Heléna Star of Foundation FM, with more acts to be announced.
Moving through the CRAFT BAR where you can print your t-shirts and paint your faces, you’ll soon discover THE FORGE, opened by Fay Milton of Savages bringing her all-female party night “TOO MANY MEN” to the underground playground. Before long, clown-witch Lucy Hopkins will be guiding a not-too-serious yet definitely soulful interactive ritual that moves into acoustic sets from Luna Bec and more, providing some calm from the The Underbar.
Expect surprises throughout the night and guest appearances from the booming community behind the disruptive actions that draw attention to the climate and ecological emergency. Dance, play, create and discover how artists and rebels are responding to our unprecedented times.
We’ve Woken up. Let’s Rise up.

Money raised from tickets will go towards covering the costs of participating artists and the costs of running the event.
You will also be invited to give a donation to Extinction Rebellion when purchasing tickets. 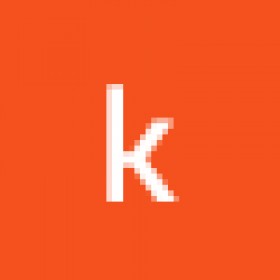 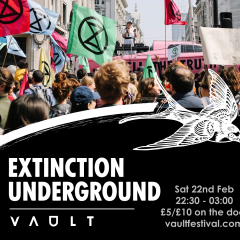 Over 80 artists respond to the planetary emergency with Extinction Underground: A late night take-over of VAULT Festival.