Yukon Territory, Northern Canada is where North America’s coldest temperature ever (-631 degrees Celsius) was recorded. It’s where there are more caribou than people, tossing chainsaws is entertainment, barbecued squirrel is food and Saturday evenings spent at the garbage dump watching bears foraging for food is a big night out.

But it’s not all sophisticated fun. It’s also a genuinely challenging place to live, where escape is difficult and where many people die tragically young as a result of accidents and the harsh Arctic winters. It’s where Jennifer Irons was born and raised, dreaming of leaving.

Growing up in a tough, isolated mining town with little prospect of reaching ‘the Outside’, Jennifer found release through performance. Specifically, it came via the unlikely circumstance of dancing the Can-Can to an audience of drunken miners in a casino in Dawson City who threw poker chips at her. Her passion for dance subsequently led to an extraordinary journey out of the Yukon, and around the world.

Jennifer said, ‘If it wasn’t for dance, I’d have probably ended up pregnant, an addict or dead. However tough it is growing up – whether it’s in the arctic or the city—the arts will always be a salvation. It’s a shame more governments don’t realise this. I mean, who would have ever thought doing high kicks for drunken miners would have got me to Edinburgh? …Though drunken miners are still very welcome!’

In Yukon Ho! (Tales from the Great White North), in character as ‘Intrepid Jen’, she tells the story of survival, escape and an eventual reconciliation through reconnection with her homeland. The show is dark, fearless, original, bizarre and very, very funny. Expect to laugh, holler, quaff very questionable cocktails and learn how to be Bear Aware. And it’s all (mostly) true...

Fringe first timer Jennifer Irons now resides in the UK. She is an award-winning choreographer, creating large-scale mass movement for international outdoor festivals, working across commercial music videos, film and TV, and making dynamic new work for theatre. Amongst many other credits she was Mass Movement Director for Akram Khan Company’s Kadamati at the 2018 Edinburgh International Festival, choreographed a number 1 hit single for Olly Murs and Rizzle Kicks and was Assistant Artistic Director for the Rugby League World Cup. She was once charged with teaching Boris Johnson to dance…

Yukon Ho! (Tales from the Great White North) is part of the programme of events curated by London’s Rose Bruford College of Theatre and Performance in Summerhall’s Upper Church. 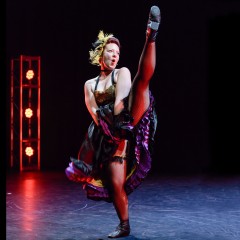