A verbose and loquacious lecturer attempts to deliver his script but is repeatedly de-railed by his own footnotes. A dance/ theatre comedic parodysolo by choreographer and theatre-maker Lewys Holt highlights the comic possibilities of the situation

As a verbose and loquacious lecturer attempts to deliver his script, he is repeatedly de-railed by his own footnotes. This solo show by dance artist and theatre-maker Lewys Holt highlights the comic possibilities of the situation.

Footnotes at the bottom of a page give extra information about something written on that page. They can add context to the main text, helping give the reader a better understanding or sometimes suggesting places for further research. They can also give frightening glimpses into what the author is really thinking underneath it all.

Like a TED talk gone wrong, the show begins as a lecture, where the topic, subject and purpose are obscured by dense jargon and pseudo-intellectual nonsense. The footnotes begin as semi-useful, if somewhat unnecessary asides and extra information, but quickly devolve into more expressive outbursts, actions and impulses. Each triggers a shift into dancing, oversharing, flirting and ever more surreal behaviour.

‘I spent about four years trying to read Infinite Jest by David Foster Wallace that had around 200 footnotes, some around 5 pages long’ said Lewys, ‘and every time you read one you’d go into this rabbit hole and forget where you were in the main text. I wanted to bring that idea of delving deep into a tangent, or something almost unrelated to what you were experiencing before, and then kind of just snapping back to what you were getting on with.’

Returning to The Fringe for the first time since his well received 2016 Summerhall show Of, or at, a Fairly Low Temperature, Holt’s dance-comedy has been compared to New Art Club (with whom he shares a mutual admiration) and branded as “delightfully and disconcertingly bizarre”.

Lewys Holt is an interdisciplinary dance artist based in the UK. Often compared with New Art Club, while his main focus is on dance he also blends in comedy, visual arts and devised theatre. He is an Associate Artist at Attenborough Arts Centre and a Breakthrough Artist at Curve, Leicester. He has worked with international artists including Tino Sehgal, Sally Marie, New Art Club, Simone Mousset, Rosemary Lee and Christopher Owen. In 2016 he was commissioned to make a responsive performance for the Arts Council Collection's 70th Anniversary Exhibition curated by Ryan Gander. www.lewysholt.com

Footnotes is created, choreographed and performed by Lewys Holt and produced by Daniel Nicholas.

Lewys Holt’s companion show Phrases can be seen at the same venue on alternate dates. 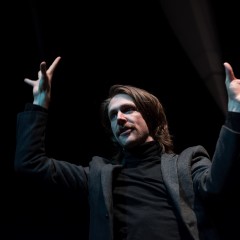 A verbose and loquacious lecturer attempts to deliver his script but is repeatedly de-railed by his own footnotes. A dance/ theatre comedic parodysolo by choreographer and theatre-maker Lewys Holt highlights the comic possibilities of the situation