Off-Broadway NY hit & the first new Shakespeare play for over 400 years. A unique new drama for 3 performers entirely created from the words of William Shakespeare to create a story examining the evolution of a relationship and gender dynamics

A striking new assemblage of Shakespeare's words, examining the evolution of a relationship

& revealing The Bard as an early feminist

For this off-Broadway New York hit, coming to the UK for the first time, writer and director Sara Fay George has created a unique new theatrical work entirely from the plays, songs, sonnets, and poems of William Shakespeare. The elements are woven together to create a story of relationship and gender dynamics seen through a humanist lens.

Last Life: A Shakespeare Play is a novel and striking assemblage of Shakespeare's words. In an intimate setting we see the story of a man, a woman and everything in-between. Trapped by Kismet in a circle of salt, they are forced to face their scars, betrayals, and vulnerabilities through a matrix of Shakespeare’s wit and words. They are both victims and predators, facing lifetimes of trauma in order to find their way out, move forward, and become free of lifetimes of hurt.

The three performers examine the evolution of a relationship, the uncovering of masculine vulnerability and the embracing of feminine strength. They encompass the elemental and essential human truth that only our bodies are truly our own and that, in the end, they too must be left behind.

‘I found inspiration in the strength and tenacity of Shakespeare’s leading women’ said Sara Fay George ‘In this post #MeToo world it is vital that we enlist men as our allies and we give each other the permission to be who we are and as we are in our shared humanity. I hope Last Life illuminates this.’

Woman is played by Esther Sophia Artner, artistic director of Piece of Yourself. ‘This role allows me to explore what it means to be a woman with NO SHAME’ she added ‘Loving, yearning, desperate, angry and forgiving’.

Khadija Sallet plays the Goddess Kismet, holding the space with her melodic, powerful, a capella voice and music of her own composition. Mikaal Bates, playing the role of Man, professionally facilitates Men’s Work, supporting the cultivation of empowered vulnerability.

‘The play’s feminism is deep, pervasive, and fundamental, George and her actors (especially Artner) give surprising credit to Shakespeare as a portrayer of women and a conduit of their desires’ John Osburn, New York University

Last Life speaks to the basic primal need in each of us for communication, understanding, and acceptance. See a short video here https://vimeo.com/280823622

Last Life: A Shakespeare Play is the result of collaboration between two New York based theatre companies appearing at the Fringe for the first time. The Box Collective is a female guided international artistic collective established in 2010 to explore and present new and emerging theatre work that blurs the line between art and performance. Piece of Yourself creates and produces performance and film dedicated to authentic and intimate storytelling, building bridges in the shape of stories and bringing into light what has been hiding in the dark. 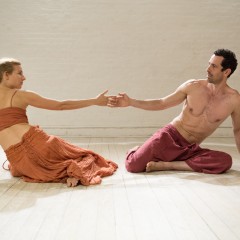 Off-Broadway NY hit & the first new Shakespeare play for over 400 years. A unique new drama for 3 performers entirely created from the words of William Shakespeare to create a story examining the evolution of a relationship and gender dynamics