Brilliantly funny new circus show for all the family from Lost in Translation, creators of the internationally successful The Hogwallops.

At: Underbelly Circus Hub, The Beauty, The Meadows, Edinburgh

A brilliantly funny new circus show for all the family from Guinness World Record holders Lost in Translation,

the multinational, multi-skilled creators of The Hogwallops

In the show we meet Madame and the charming staff of the quirkily ineffective Hotel Paradiso. Looming large is their arch enemy, the dastardly Banker, who schemes to repossess the hotel. As the tenants introduce us to their beloved home we witness their battle of wits with the Banker as he plots to claim the building in order to sell and maximise his profit. Will they manage to stay open, or will they be forced to move on?

The irrepressible Lost in Translation Circus, purveyors of ‘good old fashioned contemporary circus’, were the team behind international hit The Hogwallops. Here they turn a rundown hotel into their own physical playground as a multinational cast of six highly skilled acrobats, clowns and jugglers tell the story of the tenants’ battle to save their home and livelihood from repossession by the dastardly banker. Daring, heart-stoppingly virtuosic aerial skills, stunning floor acrobatics and juggling combine with laugh out loud clowning and physical comedy to deliver thrills, gasps, laughs and drama, plenty for both adults and children to enjoy.

‘Storytelling and circus skills are beautifully combined’ Scotsman (on The Hogwallops)

Lost in Translation Director and show creator Massimiliano Rossetti said ‘We created Hotel Paradiso in the same spirit as The Hogwallops and we think that all those who loved that show so much will be equally thrilled by this new one’.

Hotel Paradiso also features specially written music by renowned composer Peter Swaffer-Reynolds who also wrote the music for The Hogwallops and has a long history of writing music for circus, theatre and films.

Lost in Translation are a UK based company with an international membership who enjoy an ever growing reputation as leaders in the field of narrative driven circus shows. Originally founded as an acrobatic duo by Circus Space graduates in 2006, the company has since become one of the country’s leading ensembles and tours widely in the UK and Europe. Their previous show The Hogwallops toured internationally to great acclaim.LiT’s Massimiliano Rossetti and Roisin Morris are Guinness World Record holders for most catches on the Korean Cradle. 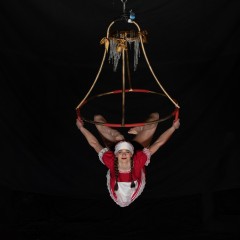 Brilliantly funny new circus show for all the family from Lost in Translation, creators of the internationally successful The Hogwallops.