New York's renowned vocal group Naturally 7, are set to perform their only UK date of their Both Sides Now European tour.

New York's renowned vocal group Naturally 7, are set to perform their only UK date of their Both Sides Now European tour at Soho's 100 Wardour St on Wednesday 18 October at 9pm.

Right in the heart of London's vibrant Soho, Naturally 7 will bring with them their unique, signature style called "vocal play" which according to group leader Roger Thomas is "the art of becoming an instrument using the human voice to create the sound". The group simulate the sounds of an instrumental band using only their voices, mouths and distortion effects.

Having previously performed with Coldplay and Michael Bublé, the performance at 100 Wardour St coincides with the European leg of their Both Sides Now tour, where they will perform hits from their seventh studio album of the same name. The album represents the ongoing development of the "band without a band". The songs are driven by warm, rich harmonies and the unique ability to perform a variety of instruments using only their voices that Naturally 7 have become synonymous with.

The show will feature performances from their vast repertoire, including songs from their new album which features classics from Ewan MacColl's 'The First Time, Ever I Saw Your Face' (as made popular by Roberta Flack) to Coldplay's 'Fix You' and the title-track: Joni Mitchell's 'Both Sides Now'. The group will also perform their original song, which always closes their live-show: 'Caught in the Moment'.

100 Wardour St has always been an important address in Soho. In 1964 the legendary London music venue the Marquee Club moved in, hosting music acts including David Bowie, The Rolling Stones, Jimi Hendrix and The Sex Pistols, before closing its doors in 1988. 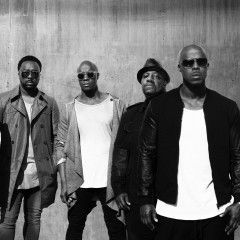 New York's renowned vocal group Naturally 7, are set to perform their only UK date of their Both Sides Now European tour.