Contemporary politics is a game without defined rules, where artifice and spin are the tools of choice, and where the moves are made across the boardroom table. When one side wins it almost inevitably profits only a select and privileged few.

In Proto-type’s new show Dead Cats, two characters are in the kind of room where they use phrases like collateral damage, like extraordinary rendition, and like perception management. They cover up their dirty words with clean ones, in rooms like this. In rooms like this the language is laundered, and they redact the names.

Focussing on media manipulation, governmental lies, political protest, secrecy, democracy, power, and influence, Dead Cats blends new writing, performance, film-making, and an obvious plant. It shows, rather than tells, the truths behind the fictions. In the witty script by Andrew Westerside, the conversation between unnamed character A (Gillian Lees) and character B (Rachel Baynton) sees them, spar, argue and banter – papering unsavoury truths over with more palatable interpretations.

Following its premiére at Köln’s Theatreszene Europa Festival, Dead Cats is touring Britain this year before picking up again in January, March, April and May. Te tour has two dates in Yorkshire this month at Sheffield Drama Studio on 14 November and Harrogate Grammar School (as part of the Harrogate Theatre programme) on 15 November .

‘As recent government announcements and retractions have so clearly (if clumsily) illustrated, it’s all about the game - all about the winning - for our politicians, and they’ll redefine anything and everything to meet their ever-changing agenda’ added Rachel Baynton.

Writer and Director Andrew Westerside explained ‘Cronyism is at the root of much political influence, and the route to political influence is corruption and spin, utilising various mechanisms for presenting alternative truths. Or lies if you prefer’.

The previous plays in the series were A Machine they’re Secretly Building, which exposed facts behind secret government surveillance ‘a smartly intelligent hour-long whizz through the world of surveillance’ (Lyn Gardner, The Guardian) and The Audit which examined the human cost of the corporate and personal greed. Both received acclaim from critics and audience alike, ‘It made me want to headbutt a bank’ (Audience Response).

Dead Cats is written and directed by Andrew Westerside, devised and performed by Rachel Baynton and Gillian Lees, with film and design by Adam York Gregory and an original soundtrack by Paul J. Rogers. It has been made possible through funding from Arts Council England as well as through the continued support of ARC (Stockton), Lincoln Performing Arts Centre, The Lowry (Salford), Theatre-in-the- Mill (Bradford) & hAb/Word of Warning (Manchester).

Proto-type are a company of multi-disciplinary artists led by Rachel Baynton, Gillian Lees, and Andrew Westerside. The company has been making work and supporting young artists in the US, the Netherlands, Russia, China, Armenia, France, Zimbabwe and the UK since 1997. Critics have described their work as ‘an intriguing brush with altered reality’, (New York Times), ‘Smartly intelligent... coolly reasoned theatre’ (The Guardian) and ‘enthralling’ (Zambezi News). 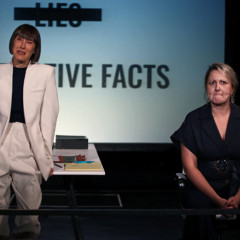