Fresh from wowing huge crowds when opening for The Libertines and John Cooper Clarke, Luke serves up banger after banger at one of the hottest, most poetic, late-night shows in town. Rock n roll poetry at its visceral, inventive best.

Fresh from wowing huge crowds when opening for The Libertines and John Cooper Clarke, Luke Wright serves up banger after banger at one of the hottest, most poetic, late-night shows in town. This is rock n roll poetry at its visceral, inventive best. You'll laugh. You'll cry. You might even pull.

Luke Wright's Late Night Dance Floor Fillers (poems) is an hour of (mostly) new poems from the man dubbed ‘The Bard of Lockdown’ by The Daily Telegraph. His deliciously funny poems are set against a backdrop of pandemic politics, ageing parents, and an endless, droning, culture war. Wright throws a squat party in his ‘poor old heart’ (bring a bottle!).  He even finds a home for a couple of crowd-pleasing favourites, including an update on the riotous Essex Lion.

‘His performances rumble with rage, passion and humour.’ Guardian

Luke said ‘I never stopped performing in lockdown. Every night I connected with audiences via the internet. In some ways we formed a sort of support group and got each other through it. I’ve never felt so connected to my audiences as I do now. I’ve never performed so well. I can’t wait to be back in Edinburgh, it’s my 15th full run! We are going to have such fun." See a short trailer here https://www.youtube.com/watch?v=19pAd_UjthQ&ab_channel=LukeWright

Luke is one of the greats. A poetic pugilist. Beguiling and hypnotic.’ Carl Barat The Libertines

Flamboyant, political and riotously funny, Luke has an international reputation as a leader of the spoken word scene and as one of the UK’s most riveting spoken word performers. His poems are delivered with dynamism, intensity and charisma. Keenly personal but always inflected with irreverent humour, his poetry is always based on his life and observations - as a poet, a father and a son. He is acknowledged as one of our top poets and one of the principle architects of the now thriving UK spoken word scene.

He is the winner of a Fringe First, a Stage Award for acting excellence and three Saboteur Awards, including Best Performer 2021.

If you like your late-night entertainment with a twist, and intelligence with your laughs, this is the show for you. 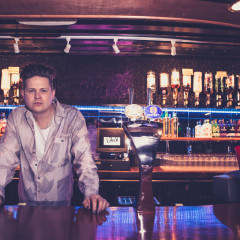 Fresh from wowing huge crowds when opening for The Libertines and John Cooper Clarke, Luke serves up banger after banger at one of the hottest, most poetic, late-night shows in town. Rock n roll poetry at its visceral, inventive best.